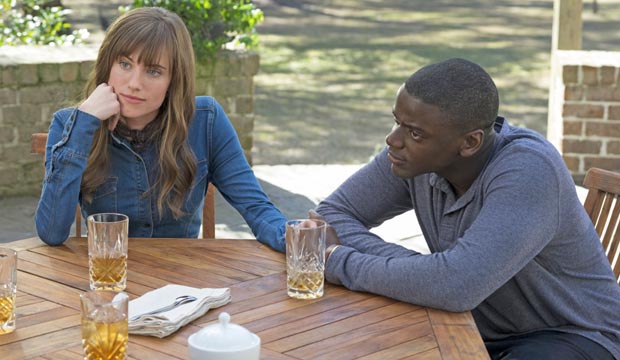 Last year I screamed from the rooftops that “Hidden Figures” would win the top prize at the SAG Awards, but none of my fellow editors or experts listened. Sure, I ended up with eternal bragging rights, but it was awfully lonely up on that predictions limb. This year “Get Out” is my no guts, no glory prediction to win the cast prize and I’m happy to see that it has a bit more support from my fellow pundits. Awards Daily’s Sasha Stone and Gold Derby’s Rob Licuria both agree with me that “Get Out” will prevail on January 21, which translates to third-place odds of 11/2 on Gold Derby’s SAG predictions chart. Frankly, I think those odds are way too low, so let me try to convince you why you should join us in predicting “Get Out.”

Led by Daniel Kaluuya, who also earned an individual SAG bid, the nominated “Get Out” cast consists of Caleb Landry Jones, Catherine Keener, Stephen Root, Lakeith Stanfield, Bradley Whitford and Allison Williams. The horror/comedy features a nice mix of movie stars and TV stars, which is a major bonus as that’s what the voting pool consists of. But what will really push “Get Out” over the edge is the diversity factor.

And that brings me to another point in “Get Out’s” favor: popularity. Since the Screen Actors Guild merged with the American Federation of Television and Radio Artists in 2012, we’ve seen a noticeable pattern of the most mainstream film prevailing at the SAG Awards. Last year’s champ “Hidden Figures” amassed $169 million at the U.S. box office, compared to $57 million for “Fences,” $47 million for “Manchester by the Sea,” $27 million for “Moonlight” and $5 for “Captain Fantastic.” If you’re doing the math at home, that means the final tally of “Hidden Figures” was $33 million more than all of its fellow nominees combined.

Of this year’s five contenders, “Get Out” is by far the most popular. It raked in a whopping $175 million domestically, far eclipsing the $42 million for “The Big Sick,” $34 million for “Lady Bird” and $25 million for “Three Billboards. The fifth nominee, “Mudbound,” streams on Netflix so box office numbers are not applicable.

SEE Do SAG Awards voters prefer casts that act together? Why ‘Game of Thrones’ loses but ‘Stranger Things’ wins

One last wildcard factor is the film’s director, Jordan Peele. While “Get Out” was Peele’s directorial debut, he’s mostly known as an actor. In fact, he’s beloved by the Screen Actors Guild, as he earned a surprise cast nomination alongside Keegan-Michael Key for “Key and Peele” (2015). To date, they’re the only two-person cast ever nominated for the top prize. Sure, Peele isn’t SAG-eligible for “Get Out” as he didn’t appear in front of the camera, but his presence will still be felt by voters.

“Get Out” currently comes in behind both “Three Billboards Outside Ebbing Missouri” (8/13 odds) and “Lady Bird” (4/1 odds) in Gold Derby’s SAG predictions. The other two nominated casts are “Mudbound” (33/1 odds) and “The Big Sick” (80/1 odds). Other than Stone, Licuria and me, five of our Top 24 Users and three of our All-Star Users also think “Get Out” will triumph at the 2018 SAG Awards.