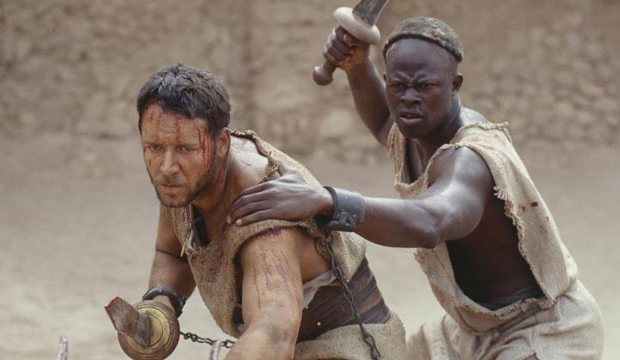 We asked whether you would be excited to see a planned sequel to ‘Gladiator,’ the Best Picture picture winner from 2000 that earned Russell Crowe his lone Oscar as Best Actor. Alas, his warrior Maximus died at the end of the first movie, which will likely cancel out its star’s return.

However, most respondents seem to care more about director Ridley Scott‘s involvement than what actor is in the ring, with 54 percent saying they would definitely see it if the British filmmaker was behind the camera. Still, 40 percent felt that there is no reason to do a sequel without Crowe returning.

Rotten Tomatoes reports the sequel  would take place years later and center upon Lucius Verus, the son of Lucilla (Connie Nielsen in the first movie), and the nephew of the late emperor Commodus (Joaquin Phoenix).

That brings up another question. Who would be a good replacement as the hero, who needs to exhibit both brawn and smarts? Perhaps Tom Hardy, Michael Fassbender or either Hemsworth brother, Chris or Liam. Benedict Cumberbatch might do in a pinch.

Meanwhile, Sir Ridley might get another chance at finally winning a Best Director Oscar for a second round of ancient Rome derring-do. He scored one of the 12 nominations for “Gladiator,” which won five, but lost out to Steven Soderbergh, who was hailed for “Traffic.” At 80, Scott shows no signs of slowing down as he managed to swiftly do re-shoots last year for his kidnapping saga, “All the Money in the World,” after its star Kevin Spacey faced accusations of sexual assault and Christopher Plummer stepped in.

It might take a while to get the sequel off the ground since Scott has at least three other possible titles lined up, an “Alien: Convenant” sequel, “Queen & Country” and “Battle of Britain.” But, according to our poll, you think it would probably be worth the wait.