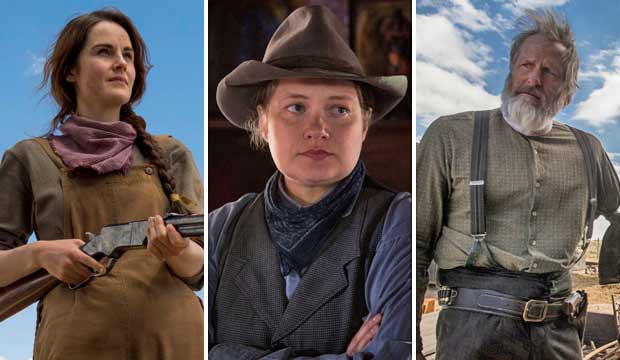 The longform categories at the Emmys have been prone to sweeps in recent years. The last three Emmy winners for Best Limited Series ended up claiming three out of the four acting awards: “Olive Kitteridge” (2015), “The People v. O.J. Simpson” (2016) and “Big Little Lies” (2017). The same could happen this year, but while on paper it looks like that would be FX’s “The Assassination of Gianni Versace,” I think we’re underestimating the possibility that it could be Netflix’s “Godless.”

As of this writing the one acting prize we’re predicting “Godless” to win is Best Movie/Mini Supporting Actor for Jeff Daniels. He leads our predictions with strong odds of 4/11 based on the combined forecasts of over 1,000 Gold Derby users. That includes support from 14 out of 16 of the Expert journalists we’ve polled so far.

Daniels isn’t a sure thing, though. He’s up against “Versace” star Edgar Ramirez, who plays the title character, plus two other “Versace” nominees, Ricky Martin and Finn Wittrock. If “Versace” wins the top prize it might seem odd for the title character not to win along with it, but O.J. (Cuba Gooding Jr.) didn’t win with “People v. O.J.,” so it’s not unheard of.

“Versace” ranks both first and second in our predictions for Best Movie/Mini Supporting Actress. Penelope Cruz leads with 1/1 odds for playing Donatella Versace, the sister of the slain fashion designer, while Judith Light is close behind with 27/10 odds for playing Marilyn Miglin, the wife of another murder victim.

But if they split the vote “Godless” standout Merritt Wever could upset; she ranks third with 11/2 odds, and she already pulled off a shocking upset once before when she won Best Comedy Supporting Actress for “Nurse Jackie” in 2013. Currently 3 out of 16 Experts are predicting Wever will pull off her second surprise win.

Even though “Versace” doesn’t have any nominee for Best Movie/Mini Actress, “Godless” star Michelle Dockery might have the toughest uphill battle to win for the western. She ranks fourth with 16/1 odds, with none of our Experts currently betting on her to prevail, but I think she’s the contender we might be underestimating the most.

SEEMerritt Wever (‘Godless’) on female-centric series: In a traditional western, ‘there probably wouldn’t have been a part for me’ [EXCLUSIVE VIDEO INTERVIEW]

Dockery is the only nominee in her category whose program has widespread academy support. The front-runner, Laura Dern (“The Tale”) is in a film that’s up for Best TV Movie, but that’s its only other nomination. Sarah Paulson is up for “American Horror Story: Cult,” which also earned a supporting bid for Adina Porter, but it’s absent from Best Limited Series. And the other three contenders in this category are the only nominees for their programs: Regina King (“Seven Seconds”), Edie Falco (“Law and Order True Crime: The Menendez Murders”) and Jessica Biel (“The Sinner”).

Additionally, Dockery is a recent TV academy favorite with three past Emmy noms for Best Drama Actress for “Downton Abbey” (2012-2014). She didn’t win for that series, so she has an Emmy IOU to cash in. And going from a British period drama like “Downton” to an American western like “Godless” demonstrates her versatility. Voters love that. Consider how actors like Michael Chiklis (“The Shield”) and Bryan Cranston (“Breaking Bad”) have won Emmys for playing against type.

And Netflix has been encroaching on FX’s territory in the longform categories. Last year the streaming service claimed Best TV Movie for “Black Mirror: San Junipero.” This year they have expanded their nominations for “Black Mirror” in addition to the breakthrough of “Godless” in the Best Limited Series race. So if there is a sweep on Emmy night, maybe it won’t be from the limited series we’re expecting.