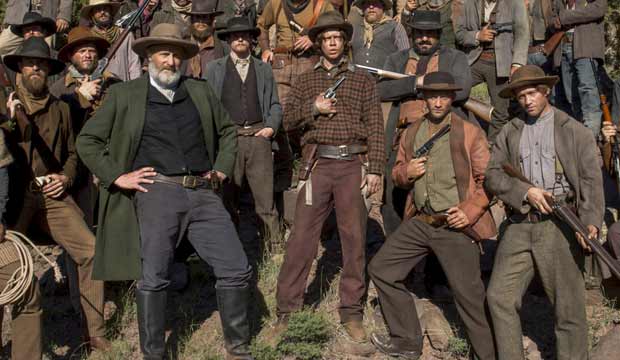 Can Netflix snag Best Limited Series at the Emmys for “Godless”? Written and directed by Scott Frank, this seven-and-a-half hour western opus centers on a man (Jack O’Connell) hiding out from a violent outlaw (Jeff Daniels) in a town populated almost entirely by women after a deadly mining accident wipes out most of the men. Gold Derby recently spoke with Frank, stars Daniels and Merritt Wever, cinematographer Steven Meizler, costume designer Betsy Heimann, composer Carlos Rafael Rivera, and makeup department head Tarra Day about their work on the series. Scroll down and click on their names below to be taken to their full interviews.

“It’s a golden time” for television, says Daniels, who’s also in the Emmy race this year for his leading role in “The Looming Tower.” “The writing has gone to Hulu and Netflix and HBO and Showtime … and actors chase good writing.” Playing the villainous Frank Griffin in a limited series as opposed to a movie excited him because of “all the things you get to play” as an actor. Daniels previously won the Emmy for Best Drama Actor for “The Newsroom” in 2013, and he was nominated again in 2014 and 2015.

Had “Godless” been a more traditional western, Wever may not have been “attracted to it, and more likely, there probably wouldn’t have been a part in it for me.” An Emmy winner for “Nurse Jackie” (Best Comedy Supporting Actress in 2013), Wever plays Mary Agnes, widow of the town mayor and sister to its sheriff, Bill McNue (Scoot McNairy). Although LaBelle is “a town with collective PTSD,” Mary Agnes is “trying to get the women of the town to see this as an opportunity for economic independence.” But she has “trouble getting all of the other women on-board.”

“I really thought I was writing a story about fathers and sons,” showrunner Frank says about his “feminist western.” The two-time Oscar nominee for Best Adapted Screenplay (“Out of Sight” in 1998 and “Logan” in 2017) originally wrote “Godless” as a feature film in 2004, but it proved difficult to sell. Conceiving it as a miniseries instead, he deepened the supporting characters, most of whom were women. He explains, “The biggest changes involve … the women in the town. I expanded a lot of the characters there. I really gave the town a lot more prominence, and it just seemed like an interesting story or an interesting setting that I’d never seen before.”

SEE Emmy race for Best Limited Series is a three-way race, according to Editors: ‘Versace’ vs. ‘Godless’ vs. ‘The Looming Tower’