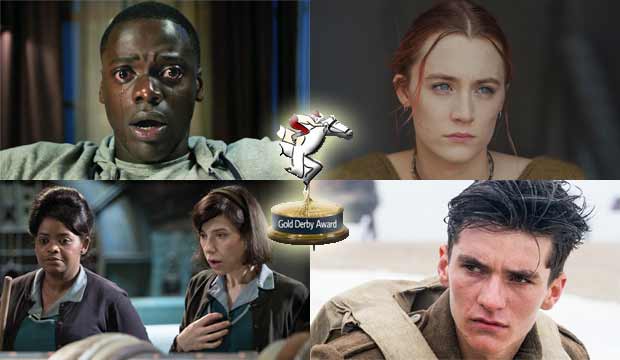 Will the 2018 Gold Derby Film Awards reflect the Oscars’ eventual choices? Or should we avoid this year’s presumptive academy favorites entirely? It’s hard to know what the Oscars will do in such an unusually close race, but you can decided for yourself between “Dunkirk,” “Lady Bird,” “The Shape of Water,” “Get Out,” and many more films as voting is now open for nominations in the 16th Annual Gold Derby Film Awards honoring the best achievements from the calendar year 2017.

To vote, visit our predictions center. Then scroll down to “Gold Derby Film Awards Nominations 2018” and click the green box to the right that says “VOTE” to enter your picks in as many or as few categories as you like. Select your top three favorites in each category, arranged in order of preference. Your number-one choice will get three points, your number-two choice gets two points, and your number-three choice gets one point. The top five scorers in each category will be the final nominees.

There’s one exception: Best Picture. There will be 10 nominees in that category, so you can vote for your top five favorites, with five points going to your number-one choice down to one point for your fifth-place choice.

If you haven’t seen all the contenders yet, don’t worry. You can vote now and edit your ballot as often as you like until voting closes on Sunday, January 28, at 11:59 p.m. Eastern Time. Choose your favorite films and performances in 22 categories now. Nominees will be announced on February 1.

From 2002 to 2010, voting was conducted via secret ballot through our message boards, and during that time, five out of our nine Best Picture winners matched the Oscars’ choice.

Voting moved to our quick and easy predictions center in 2011, and our users agreed with the academy for three years in a row, picking “The Artist” (2011), “Argo” (2012), and “12 Years a Slave” (2013) as the Best Pictures of the Year. But then our users deviated by picking “Boyhood” (2014) for Best Picture and Best Director (Richard Linklater) instead of eventual Oscar champ “Birdman.” We went our own way again the next year, giving “Mad Max: Fury Road” (2015) eight awards including Picture and Director (George Miller). And last year’s prize went to the Oscar frontrunner at the time, “La La Land” (2016), but it was the Oscars that threw a curve ball by picking “Moonlight.”

All 15 of Gold Derby’s previous Best Picture champs are listed below, in addition to our special award honoring the best film of the last decade (2000-2009). And you can see the complete history of the Gold Derby Film Awards here.

Be sure to vote for the 2018 Gold Derby Film Awards. Weigh in now with your picks to help us choose the best of the best. You can keep changing your votes right up until 11:59 p.m. ET on January 28. And join in the fierce debate over the Oscars taking place right now with Hollywood insiders in our forums.