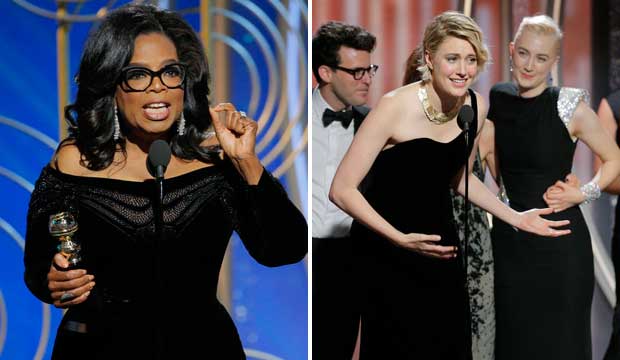 For the awards-obsessed writers and editors of Gold Derby, the Golden Globe Awards are the official beginning of awards season in Hollywood, and what better way to celebrate than to watch celebrities drink and mingle while fancy trophies are handed out by about 90 foreign journalists for the best in film and television? We eagerly await the opening of every envelope, transcribe every speech and celebrate our savvy predictions while bemoaning those upsets that show us up.

Below, our collective thoughts on the highs, lows, and WTF moments of Sunday’s kudoscast for the Golden Globes 2018. Check out the complete list of winners here.

The acceptance speech by Oprah Winfrey was transcendent, rousing, heartfelt, real and inspiring. Everything that Oprah embodies. Apart from that unforgettable moment, I am happy that the narrative shifted to the #TimesUp movement, with nary a mention of the president, who was surely watching from bed whilst eating a cheeseburger, thumb firmly planted on the tweet button (and in turn temporarily relegating him to irrelevance for at least one night). Rob Licuria

Oprah. It was almost a given that Cecil B. DeMille Award recipient Oprah Winfrey’s speech would be great, but no one could have predicted it would be THIS great. From her personal stories to her sideways attacks at the president, Oprah managed to elevate an evening that was already top notch. Marcus James Dixon

Giving us a Satine and Christian from “Moulin Rouge” reunion with wins for Nicole Kidman and Ewan McGregor, and Natalie Portman dragging the HFPA for the all-male directing lineup. Joyce Eng

Natalie Portman. Most would’ve just got to the job at hand after Oprah’s rousing speech. Not Portman she pointed out the hypocrisy of the Best Director category being all-male! Amanda Spears

Best Picture/TV Series and Actress winners lining up completely. Seeing Elisabeth Moss and “The Handmaid’s Tale,” Rachel Brosnahan and “The Marvelous Mrs. Maisel” and Nicole Kidman and “Big Little Lies” all win just shows the power of female-led TV in 2017. Same goes for Frances McDormand and “Three Billboards” and Saoirse Ronan and “Lady Bird.” Those five lead performances are so strong-willed and independent so it’s nice to see given the #TimesUp theme of the evening. Kevin Jacobsen

Natalie Portman had the unenviable position of following Oprah’s instantly iconic speech to present Best Director. But she didn’t miss a beat when introducing “all the male nominees.” There is a new shade queen in Hollywood. Also, Elizabeth Moss invoking the words of an absent Margaret Atwood during her Best TV Drama Actress speech provided a welcome sense of gravitas to the evening. Sam Eckmann

Frances McDormand is a national treasure. Such a great speech, so honest and direct without the meaningless drivel usually found in these speeches. Tony Ruiz

The HFPA embracing films that are challenging and provocative. They didn’t go with the safe bets and are to be applauded (even if it wreaked havoc with my predictions). Paul Sheehan

Fantastic speeches expressing solidarity with women in the wake of the #MeToo and now #TimesUp movement, especially from Oprah Winfrey, Elisabeth Moss, Laura Dern, and Nicole Kidman. It was especially gratifying to hear Winfrey mention the working class women who suffer under harassment and assault without the power or resources to even pursue justice. Daniel Montgomery

SPEECHES! Of course Oprah stole the show and no one could top her but several were certainly fantastic. Guillermo Del Toro talking about his “monsters” was moving and made even better when he silenced the “wrap it up” music to finish his speech. And then there’s Frances … She don’t give two f*cks about anything and I AM LOVING IT! Charles Bright

A moment that might have looked ugly but was really really good was Sam Rockwell‘s upset win for “Three Billboards.”  As he left the table to go up to speak, he began to kiss everyone at his table, but when he tried to kiss Frances McDormand, she waved his away with an “Eeew! Boys!” kind of expression.  But as the evening went on, it became clear that both actors had enormous affection for one another. Tom O’Brien

No disrespect to the overdue Gary Oldman, but I am disappointed that the HFPA did not go their own way (which they often do) and award Timothee Chalamet for his incredible performance in “Call Me By Your Name.” Rob Licuria

Year after year, the Golden Globes have been known to go their own way on the television side, creating a vast disconnect from the Emmys. This year, however, they practically copied the Emmys award for award. Can we please bring back the shocking, unexpected Golden Globes next year? Marcus James Dixon

Repeating all the Emmy winners where eligible. Yawn. Joyce Eng

Another year, another awards ceremony with Bob Odenkirk and Liev Schreiber sitting on the sidelines. When will one (or both) of these brilliant actors at last triumph? Andrew Carden

Kind of bad, but thanks Aziz Ansari for the shout out to awards websites for getting his category wrong. We’ll be discussing it for years to come! Amanda Spears

It was heartbreaking to watch Laurie Metcalf and Greta Gerwig lose their respective awards, as they were clearly the best in their categories. At least Saoirse Ronan and “Lady Bird” won. But I would have liked a clean sweep! Kevin Jacobsen

Trying to create a joke out of Alicia Vikander and Michael Keaton being the next great Hollywood pair? That made no sense Seth Meyers, and you know it. Sam Eckmann

No love for “Call Me By Your Name.” One of the most beautiful, haunting films of the year is in real trouble if it can’t pick up some traction somewhere. Tony Ruiz

Wheeling out Kirk Douglas made for must-not-see TV. Paul Sheehan

Seriously, why would the Hollywood Foreign Press even bother to nominate the “Will & Grace” reboot only to embarrass it with another shutout? Daniel Montgomery

No wins for “The Post” is a really disappointing result for this year’s ceremony. You would think an organization of journalists would be excited to reward a film about an important moment in their industry that’s being released at the very time the leader of the free world is putting their industry under siege. Charles Bright

Speaking of “Three Billboards,” why did NBC, for every win for the film, chyron the movie as “Three Billboards Outside OF Ebbing, Missouri.”  Did you not get the press kit, NBC?  Where are publicists when you need one? Tom O’Brien

DISCUSS the Golden Globes with Hollywood insiders in our notorious forums

There is one stupid awards show tradition that needs to stop. Wasting precious seconds having someone come out and formally introduce each film nominated for Best Picture, then cutting to a trailer of that film that anyone can see on YouTube. It takes up time and slows the show down. Please stop. Rob Licuria

Since the show ran long, many of the presenters didn’t get to say anything other than the names of the nominees and the winners. The Globes need to do a better job of time management next year. I’d say more, but I’ve run out of time. Marcus James Dixon

Me, for snapping and tweeting a picture of Barbra Streisand’s right profile. Jack Fields

Since she was assigned to present Film Drama Actress instead of Drama Actor, I will never forgive the HFPA for not letting Isabelle Huppert pronounce Timothée Chalamet the way it was meant to be pronounced. Joyce Eng

No standing ovation for the incomparable living legend that is Shirley MacLaine?! Shameful. Andrew Carden

Film clip presenters: Why were some presented by the stars and creators affiliated with the film and others were not? It should be one way or the other. Amanda Spears

Ewan McGregor is wonderful in “Fargo” but Kyle MacLachlan was truly next-level in the “Twin Peaks” revival. A really shameful loss. Kevin Jacobsen

For God’s sake, can we put nominees closer to the stage? The producers would not go over time if we weren’t subjected to minute after minute of the nominees (those from television, in particular) spending SO MUCH TIME just getting to the stage! Tony Ruiz

The relentless parade of the stars of upcoming series on NBC. Paul Sheehan

On a night of solidarity with women and oppressed people, it sent a mixed message to give the most awards to “Three Billboards,” a film that presents a racist torturer cop as a heroic figure — while giving nothing to “Get Out” and no writing award to Greta Gerwig (“Lady Bird”). Daniel Montgomery

The HFPA had the opportunity to be the one organization that rewarded the amazing achievement of “Twin Peaks: The Return” by giving Kyle MacLachlan the award for Best Movie/Mini Actor. I have no issue with Ewan McGregor’s performance on “Fargo,” but if you think playing two characters is an acting achievement, try playing three or four like MacLachlan did. All we can hope is that the Emmys remedy this egregious oversight but, sadly, I don’t think it’s likely. Charles Bright

No wins for “Dunkirk,” “Get Out,” or “Call Me by Your Name”? Hope Oscar voters don’t make the same mistake. Oh, and Dougie Jones was robbed. Zach Laws