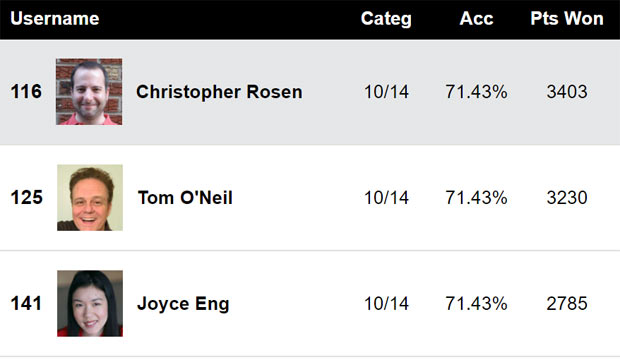 Congratulations to our Experts Christopher Rosen (Entertainment Weekly), Tom O’Neil (Gold Derby), and Joyce Eng (Gold Derby) for an excellent score of 71.43% when predicting the 2018 Golden Globes film winners on Sunday. They are best among all 23 Experts, journalists who cover the entertainment industry throughout the year. See Experts’ leaderboard.

Over 3,300 people worldwide predicted these Globe winners in all 14 film categories. The awards ceremony was held in Beverly Hills and was hosted by Seth Meyers on NBC. Rosen wisely predicted that “Three Billboards Outside Ebbing, Missouri” would win Best Film Drama. O’Neil went against the grain by predicting the “Three Billboards” victory for Best Screenplay. Eng shrewdly anticipated the Best Film Supporting Actress win for Allison Janney (“I, Tonya“).