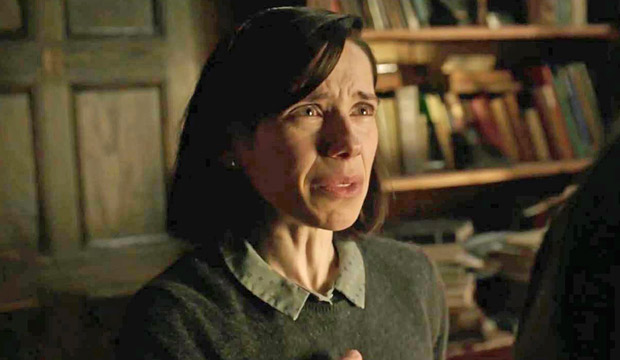 In the category of Best Film Drama Actress at Sunday’s Golden Globes, there are four Americans among the nominees, and only one foreigner: Sally Hawkins (“The Shape of Water”). The homegrown actresses are Jessica Chastain (“Molly’s Game”), Frances McDormand (“Three Billboards Outside Ebbing, Missouri”), Meryl Streep (“The Post”) and Michelle Williams (“All the Money in the World”). If there’s anything the Hollywood Foreign Press usually loves to award at the Globes, it’s non-Americans. Might Hawkins benefit from being the only English nominee in the category?

In “The Shape of Water,” Hawkins plays Elisa Esposito, a mute janitor at a secret research facility. There, she falls in love with a captured amphibian creature. So far this awards season, Hawkins has also received recognition from Critics’ Choice and SAG Awards. She’s also won some critics prizes, including Boston, Dallas-Fort Worth, and Los Angeles.

SEE ‘The Shape of Water’: Top 5 reasons why it will win Best Picture at the Oscars

The last time the sole non-American nominated for Best Drama Actress that managed to win was Emma Thompson for “Howards End” (1992). There, she was up against Mary McDonnell (“Passion Fish”), Michelle Pfeiffer (“Love Field”), Susan Sarandon (“Lorenzo’s Oil”) and Sharon Stone (“Basic Instinct”). Over in the category of Best Drama Actor, the sole non-American nominee has managed to win there twice within the last seven years. Those winners were Colin Firth for “The King’s Speech” (2010) and Daniel Day-Lewis for “Lincoln” (2012).

As of this writing, McDormand is out front to win Best Drama Actress with 8/11 odds, according to exclusive Gold Derby predictions. But Hawkins is still a strong contender as she has 23/10 odds to prevail. Rounding out the list of nominees are Streep (11/1 odds), Chastain (33/1 odds) and Williams (80/1 odds).

SEE‘The Shape of Water’: Top 5 reasons why it will win Best Picture at the Oscars

McDormand has earned five individual Golden Globe nominations in the past, but still has yet to win. To date, the only Globe she’s ever received was a special award as a member of the ensemble for 1993’s “Short Cuts.” McDormand was first nominated in 1996 for “Fargo.” While she did go on to win the Oscar that year, she lost the Globe for Best Actress in a Comedy/Musical to Madonna for “Evita.” Her second nomination was for Best Supporting Actress in 2000 for “Almost Famous,” where she lost to her co-star, Kate Hudson. McDormand was nominated in the Supporting Actress category once again for “North Country” in 2005. There, she lost to Rachel Weisz for “The Constant Gardener,” who just so happened to have been the only non-American among those nominees.

In 2008, McDormand was back in the category of Best Actress in a Comedy/Musical for “Burn After Reading” where she, interestingly enough, lost to Sally Hawkins for “Happy-Go-Lucky.” In 2014, McDormand earned her very first Golden Globe nomination on the TV side for “Olive Kitteridge.” While she did go on to win the Emmy later that year, she lost the Globe for Best Actress in a Miniseries/Television Movie to Maggie Gyllenhaal for “The Honorable Woman.”