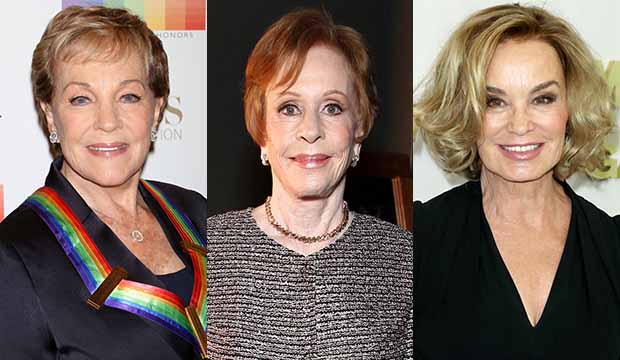 For the 76th Golden Globes ceremony in January, which actress should be chosen for the 2019 Cecil B. DeMille life achievement award? The Hollywood Foreign Press Association generally announces this honorary recipient in early November, so the next person should be revealed soon. Vote in our poll below featuring 12 ladies all over 50 who deserve recognition.

The most recent choices have been megastars Oprah Winfrey (2018) and Meryl Streep (2017), both of whom gave memorable speeches. Before them, the three choices were Woody Allen (2014), George Clooney (2015), and Denzel Washington (2016). Other than Winfrey and Streep, the only other women chosen this century have been Jodie Foster (2013) and  Barbra Streisand (2000). And previous to that, only 11 actresses had been feted since the first award was given out to its namesake in 1952. See our photo gallery below of the complete history of the DeMille Award.

While these kudos do give out prizes for both television and films, the DeMille honorees are almost always movie stars or directors. To that end, we picked the following 12 film actresses for our poll: Julie Andrews, Annette Bening, Carol Burnett (who has had a surprising number of film nominations), Cher, Sally Field, Jane Fonda, Whoopi Goldberg, Diane Keaton, Jessica Lange, Angela Lansbury, Helen Mirren and Sigourney Weaver. Since they rarely honor someone who is also nominated that year, we aren’t including strong awards contenders Glenn Close, Nicole Kidman and Julia Roberts in this poll.

The next recipient will be presented with the tribute at the 2018 Golden Globe Awards ceremony on January 6. Let’s help the HFPA narrow down their choices. Along with Winfrey, Streep, Foster and Streisand, actresses Doris Day (1989), Sophia Loren (1995), Shirley MacLaine (1998) have received this award before and are therefore not eligible to be selected.

Vote now in our actress poll below. And keep watching for a male actor poll coming soon.