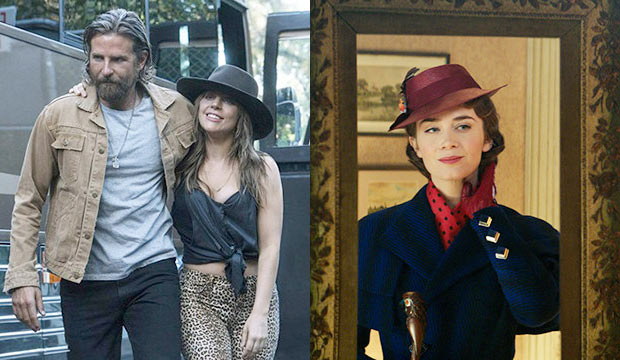 History could be made at this year’s Golden Globes if voters decide to sing the praises of “A Star Is Born” as Best Film Drama and “Mary Poppins Returns” as Best Film Comedy/Musical. It’d be the first time in the 76-year history of the Hollywood Foreign Press Association that musicals won both top prizes. Since the Golden Globes designate a category specifically for musicals, it’s rare for such a movie to try its luck over on the drama side, but that’s exactly what “A Star Is Born” is doing this year. Will the Globes go gaga for this unique strategy?

Dramas and comedies/musicals were first separated into their own categories at the 9th annual ceremony that honored films released in 1951. Before that year the Golden Globes had been awarding just a single “Best Picture,” a la the Oscars. By splitting up the picture and lead acting races into dramatic fare and comedic/musical fare, it allows the HFPA to branch out and honor less-conventional, yet still award-worthy, contenders each year.

The Golden Globes have always had a soft spot for musicals, with such classics as “My Fair Lady” (1964), “The Sound of Music” (1965), “Beauty and the Beast” (1991) and “Chicago” (2002) all claiming top honors. And who could forget two years ago when modern-day musical “La La Land” (2016) became the biggest champion in the telecast’s history with seven victories: Best Film Comedy/Musical, Actor, Actress, Director, Screenplay, Score and Original Song.

Both “Mary Poppins Returns” and “A Star Is Born” are sequels or remakes of former Golden Globe faves, which will definitely help their cases this time around. The original “Mary Poppins” (1964) was nominated for four Globes, with Julie Andrews floating off with Best Comedy/Musical Actress and “My Fair Lady” winning the picture prize. Emily Blunt, who now takes over as strict nanny Mary Poppins 54 years later, is hoping to follow in Andrews’ footsteps.

The 1954 edition of “A Star Is Born” took home Golden Globes for Judy Garland and James Mason, while the 1976 version won Best Film Comedy/Musical in addition to leads Barbra Streisand and Kris Kristofferson. Might the stars of the current 2018 rendition, Lady Gaga and Bradley Cooper, continue this trend? Gaga plays Ally, an aspiring singer/songwriter, while Cooper stars as an alcoholic country singer who falls madly in love with her.