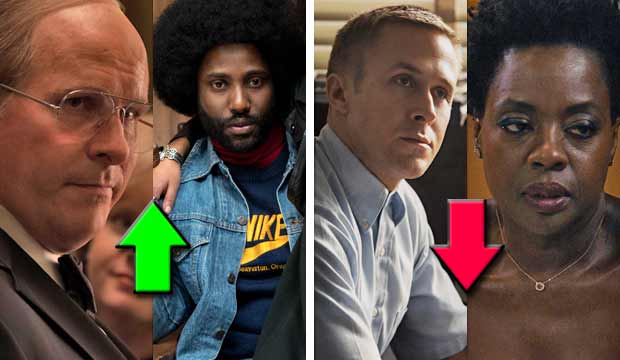 The Hollywood Foreign Press Association that decides the Golden Globe Awards doesn’t have any members in common with the motion picture academy that picks the Oscar winners, but the Globes are one of the highest profile televised awards of the year, so they do have the power to shape the trajectory of the entire awards season. The 2019 Globe nominations were announced on Thursday morning, December 6 (see the complete list here), so who’s up and who’s down in the Oscar race, and why?

SEE‘Vice’ exceeds expectations in Golden Globe nominations with 6, followed by ‘A Star is Born’ and ‘The Favourite’ with 5

“BlacKkKlansman” — Spike Lee‘s film tells the true story of a black police officer who managed to infiltrate the Ku Klux Klan in the 1970s. We were pretty sure it would be nominated for Best Film Drama, but we weren’t as certain about where else it would contend. It ended up with more noms than we were predicting — four in all, including acting bids for John David Washington and Adam Driver, and a directing citation for Lee, who hadn’t been nominated by the Globes since his writing and directing bids for “Do the Right Thing” (1989) almost 30 years ago.

“Green Book” — Like “BlacKkKlansman,” this is also a fact-based film about American racism, and we were pretty sure it would do well. It got the nominations we were expecting for Best Film Comedy/Musical, for the performances by Viggo Mortensen and Mahershala Ali, and for its screenplay. But it surprised us by also earning a nomination for Peter Farrelly‘s direction over noteworthy contenders like Barry Jenkins (“If Beale Street Could Talk”), Damien Chazelle (“First Man”) and Yorgos Lanthimos (“The Favourite”). That’s a big vote of confidence for the film.

“Vice” — We thought the most nominated films would be “A Star is Born” and “The Favourite,” but instead the leading is was “Vice,” the scathing satire about Vice President Dick Cheney. It’s nominated for Best Film Comedy/Musical. It contends for Adam McKay‘s writing and directing. And it’s up for three acting awards, the most of any film: a lead nom for Christian Bale and supporting bids for Amy Adams and Sam Rockwell. As with “Green Book,” the nomination for directing is especially significant given who McKay beat out.

“First Man” — Critics loved it, but its status in the Oscar race was in question given its disappointing box office; financial losses tend to be stigmatized even though industry awards are supposed to be strictly about quality. But its shortfall at the Globes especially stung since these awards have separate categories for dramas and musicals/comedies, which should have given the Neil Armstrong biopic room to breathe. It was left out of Best Film Drama, and even though they both won for “La La Land” just two years ago, star Ryan Gosling and director Damien Chazelle weren’t nominated either. The film’s only recognition was for supporting actress Claire Foy and composer Justin Hurwitz.

“Widows” — Like “First Man,” this gritty heist film had stellar reviews, but less-than-stellar box office receipts. However, star Viola Davis won a Globe for “Fences” (2016) two years ago, and director Steve McQueen won Best Film Drama for “12 Years a Slave” (2013) five years ago, so it should have been nominated somewhere, right? Alas, it was shut out completely.

“Black Panther” — Nominations for writing, directing or acting would have been nice, but it did pick up noms for Best Song (“All the Stars” by Kendrick Lamar and SZA) and Best Score to go along with its bid for Best Film Drama, and I wasn’t sure they’d nominate it for anything given their ambivalence about superhero films. “The Dark Knight” (2008) wasn’t even nominated for Best Film Drama, so I’d call these three bids a moderate success for the Marvel blockbuster.

“The Favourite” — With five nominations it’s tied with “Green Book” and “A Star is Born” as the second most nominated film of the year behind “Vice.” It did miss in one significant category: Best Film Director for the aforementioned Lanthimos. But despite that miss it was nominated everywhere else it was expected to be, including Best Film Comedy/Musical and Best Film Screenplay. And it tied “Vice” for the most acting nominations with a trio of bids for lead actress Olivia Colman and supporting contenders Emma Stone and Rachel Weisz.

“If Beale Street Could Talk” — A split decision for Barry Jenkins‘s film about a black man in jail for a crime he didn’t commit. It’s up for Best Film Drama. Jenkins is nominated for writing, but not directing. Regina King earned her expected nomination for her supporting performance, but there are no lead-acting bids and no nominations for its score. Then again, the film’s star Stephan James was nominated for his performance in the TV drama “Homecoming,” so maybe that was they Globes’ way of recognizing him for both performances.

“Roma” — This film also had a big miss in the Globe nominations: its leading lady Yalitza Aparicio was missing in action. But that’s understandable because she’s a newcomer and the Globes are obsessed with A-list stars. The film was right on the money everywhere else, receiving noms for Alfonso Cuaron‘s writing and directing as well as Best Foreign Language Film (it wasn’t eligible for Best Film Drama).

“A Star is Born” — The one big miss for this film was Best Film Supporting Actor, where Sam Elliott was expected to contend but didn’t. It didn’t get a nomination for Bradley Cooper‘s screenwriting either, but that’s less surprising for a musical film where the focus is on the songs more than the dialogue. But Cooper did earn bids for his acting and directing. Lady Gaga earned her expected bids for acting and songwriting. And the film is up for Best Film Drama, where it’s the most nominated film in the field. Not half bad.