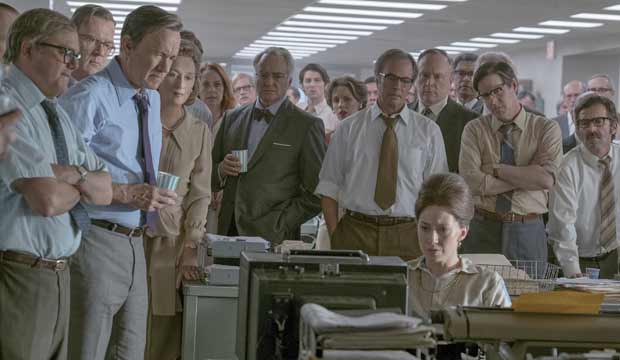 One of the better jokes written for Seth Meyer’s opening Golden Globes monologue was when he mentioned Steven Spielberg’s “The Post” and a woman rushed to him from offstage with a batch of Globe statuettes in her arms. “No, not yet, we have to wait. . .and see what happens,” Meyers said.

Sadly, from my point of view, “The Post” didn’t get any of those awards. I love the movie and still believe it is a major contender for Oscars. However, the joke took me back 32 years to another Golden Globe show where Spielberg was nominated and didn’t win for “The Color Purple” and his woes had just begun. Though he was nominated for — and would win — the Directors Guild Award, he was left off the Oscar ballot even while his film was racking up 11 other nominations. It was an embarrassment exacerbated on Oscar night when the film was shut out entirely.

The common explanation for Spielberg’s Oscar snub was jealousy. His peers in the academy couldn’t abide his mammoth commercial success with the earlier “Jaws,” “Close Encounters of the Third Kind,” “E.T.” and the first two Indiana Jones movies. And “The Color Purple” was another blockbuster.

I was then a movie columnist for the Los Angeles Times and I called a few members of the directors branch of the academy to see if they could enlighten me about their dissing of Spielberg. I didn’t expect them to admit to envy, but I was surprised that every one of them said they simply hated the movie.

There was more to it than that, obviously. Nearly every other branch nominated the film and it picked up nominations for Whoopi Goldberg, Margaret Avery and future presidential hopeful(?) Oprah Winfrey. So, Spielberg got great dramatic performances from a Chicago TV show host, a comedian and an actress known mostly for series TV but he didn’t do enough to earn a director nomination for himself?

The directors that I spoke with pointed to the 180 turn the movie made from the opening of Alice Walker’s novel. The book starts with the scene of a 13-year-old girl being raped by her father; the movie starts with two girls joyfully frolicing in a field of purple flowers. I asked Winfrey in an interview before the movie’s opening if she was okay with that tone switch and she said she agreed with Spielberg it was necessary to warm an audience for the tough messages to come. His fellow directors saw it as unforgivable case of pandering.

It’s understandable that his peers would be jealous of his success but they didn’t hold it against him when he won Oscars for “Schindler’s List” and “Saving Private Ryan” and was later nominated for “Munich” and “Lincoln.” If he makes a good movie, or at least a good dramatic movie, he is rewarded.

“The Post” is a good, nearly great dramatic movie, a docudrama about the Washington Post’s publication of the Pentagon Papers. It is a far more straightforward picture than “The Color Purple” and Spielberg’s decision to rush it into theaters now, while the media is under constant assault from the president of the United States, was an honorable thing to do.

I expect his name to appear on tomorrow’s DGA ballot and two weeks from today when the Oscar nominations are announced. If it doesn’t happen for him and for the movie, it will because of the depth of the field not because of a conspiracy of envy.