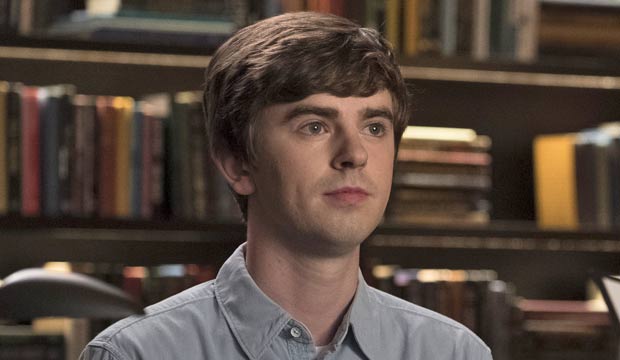 ABC’s medical drama “The Good Doctor” kicked off its second season on September 24, and it still does not disappoint. The show’s star, Freddie Highmore, continues to shine in his portrayal of Shaun Murphy, a surgical resident with autism and savant syndrome. He received a Golden Globe nomination last year for Best TV Drama Actor, though he ended up losing to Sterling K. Brown (“This Is Us”). Will he be able to snag a second nomination?

In “The Good Doctor” season two premiere, Shaun proposed a treatment for a homeless person, which put himself and his colleague Jared (Chuku Modu) in the crosshairs of Dr. Andrews (Hill Harper), while a conflicted Dr. Glassman (Richard Schiff) had to make one of the most important decisions in his life. Highmore continues to rise to the challenges of the role, from the American accent to conveying the unique experiences of his neuroatypical character. On top of all that, he went above and beyond and actually wrote the season opener.

Highmore has already garnered praise in year two. Hanh Nguyen (IndieWire) calls the series “unapologetically sentimental and heartwarming thanks to its lead.” A.D. (SpoilerTV) thought the premiere was an “amazing hour of TV.” And Paul Dailly (TV Fanatic) says the show is off to a “successful start” in its second season.

Highmore’s previous television breakthrough was as Norman Bates in A&E’s “Psycho” prequel “Bates Motel,” which ran for five seasons (2013-2017). Despite critical praise and three Critics’ Choice nominations (2014, 2015, 2018), he was snubbed year after year at the Emmys, Globes, and SAG Awards. And while he was finally able to land his first Globe bid last year for “The Good Doctor,” the Emmys and SAG continued to ignore his work.

SEE‘The Marvelous Mrs. Maisel’ is trying to be the first comedy Golden Globe champ in eight years to go back-to-back

The Hollywood Foreign Press Association that hands out the Golden Globes tends to award newer shows and performances, but there are plenty of examples of actors being nominated for sophomore seasons. Just last year Aziz Ansari (“Master of None”), Brown (“This Is Us”), Claire Foy (“The Crown”), David Harbour (“Stranger Things”), Chrissy Metz (“This Is Us”), and Issa Rae (“Insecure”) were all nominated for their shows’ second years, and Ansari and Brown actually won. In addition, the Globes often like to be the first to recognize breakout actors for their work, and since Highmore was snubbed at the Emmys, they still have the opportunity to anoint him before anyone else does.

Do you agree that Highmore should be nominated for a second Golden Globe?