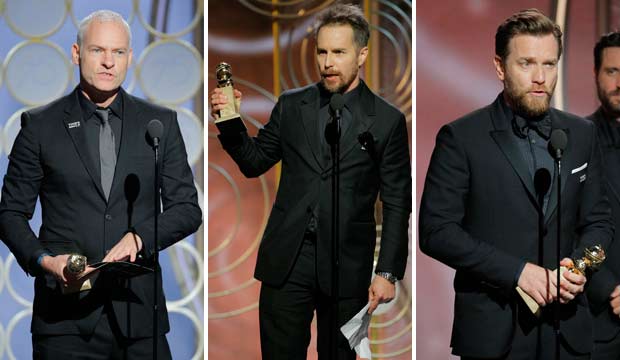 If there’s one thing you can usually count on at the Golden Globes, it’s that there are going to be big upsets. Below were the biggest surprises that the Hollywood Foreign Press Association gave us this year. Check out the complete list of winners here.

Best Film Drama ended up being a bit of a shocker. By the time the final award was announced by Barbra Streisand, it wasn’t too surprising that the top prize went to “Three Billboards Outside Ebbing, Missouri,” but going into the evening it was in third place in our combined odds at 6/1. “The Shape of Water” was out front in that category (9/5) followed by “The Post” (2/1).

Long before that, though, with the second award of the evening, the Globes gave us a surprise in one of the same categories that shocked us last year by giving the Best Film Supporting Actor prize to Sam Rockwell for “Three Billboards,” which was our first indication of the oncoming wave of support for that film. He was in third place in our odds at 12/1. Our predictions had Willem Dafoe out front for “The Florida Project” (21/20), followed by Christopher Plummer for “All the Money in the World” (7/4).

Probably the biggest surprise of the evening was the German and French co-production “In the Fade” taking the prize for Best Foreign Language Film. Our predictions had that movie ranked dead last with 66/1 odds of winning. Fellow Cannes Film Festival competitor (and Palme d’Or winner) “The Square” was way out front with its odds at 10/9. Angelina Jolie’s film “First They Killed My Father” was ranked second (21/10), followed by “A Fantastic Woman” (5/1) and “Loveless” (40/1).

“This is Me” from “The Greatest Showman” wasn’t too far behind in our predictions for Best Song — it ranked second with 11/5 odds — but it was still a bit of a shock. “Remember Me” from “Coco” was out front with its odds at 1/1. But even with Kristen Anderson-Lopez and Robert Lopez having an IOU after losing for “Let it Go” from “Frozen,” it still wasn’t enough to overcome last year’s champs Benj Pasek and Justin Paul, who had previously won for “City of Stars” from “La La Land.”

The TV side went mostly as expected, but it still had its share of surprises, and the biggest was Ewan McGregor’s win in Best TV Movie/Limited Actor for “Fargo.” He was down in third place in our odds with a 3/1 chance of winning. Our frontrunner was two-time Oscar winner Robert De Niro for playing Bernie Madoff in “The Wizard of Lies” (7/4), and in second we had Kyle MacLachlan for “Twin Peaks: The Return” (12/5).

Aziz Ansari was in second place in our forecast for Best TV Comedy Actor, but he too shocked us by prevailing for “Master of None.” He had odds of 3/1 in our predictions center, but out front was Eric McCormack for the return of “Will & Grace” at 21/20 odds. An overwhelming number of our Editors were picking McCormack, as was I in a last-minute switch. Aziz, you were perfectly right during your acceptance speech to put us awards websites in our place for not having you out front.