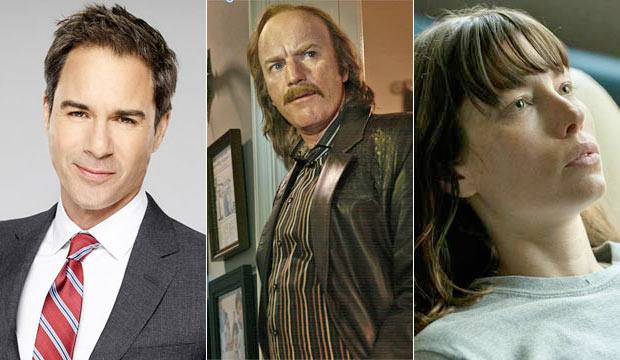 NBC and Matthias Clamer/FX and USA

Are we all feeling too secure about “The Handmaid’s Tale” and Elisabeth Moss winning matching Golden Globes to go with their Emmys? Maybe. But it’s very hard to see any other option besides the two of them for Best Drama Series and Best TV Drama Actress. I haven’t even thought about these two categories since Dec. 11, but I can’t stop thinking about these following three:

Best Comedy Actor — I have Eric McCormack (“Will & Grace”) at the moment because 1) I don’t think the show is winning comedy series, and 2) surely the Hollywood Foreign Press Association can’t extend “Will & Grace”’s dubious losing record to 0-29. The Globes like marching to the beat of their own drum, but every once in a while they can be guilted into falling in line (cough, “Breaking Bad,” cough). McCormack and Debra Messing also hosted the Globes’ 75th anniversary special, which should’ve scored him some brownie points. But I am thisclose to switching to Kevin Bacon (“I Love Dick”), the biggest name from the newest show who could snag this a la Billy Bob Thornton last year for “Goliath,” which just so happens to also hail from the HFPA’s beloved Amazon.

TV Movie/Limited Series Actor — I can see any one of these guys winning, except for Geoffrey Rush (“Genius”). Robert De Niro (“The Wizard of Lies”) can obviously prevail on his name alone – he hasn’t won in 37 years, which could both help and hurt him – and Kyle McLachlan (“Twin Peaks: The Return”) won for the original series 27 years ago. But his show didn’t make the series lineup, which gives me pause. Same with Jude Law (“The Young Pope”). So I’ve defaulted to Ewan McGregor (“Fargo”). Unlike at the Emmys, “Fargo” has won an acting award before at the Globes (Thornton), and this is McGregor’s third nomination. I’m also not-so-secretly hoping for a “Moulin Rouge!” backstage photo reunion if he and Nicole Kidman both win.

TV Movie/Limited Series Actress — OK, this seems like a no-brainer for Kidman (“Big Little Lies”), who looks poised be one of those complete TV sweepers and is already adored by the HFPA, who gave her her first major award 22 years ago for “To Die For.” I might switch back to her by Sunday, but I currently have Jessica Biel (“The Sinner”). She fits the mold of a typical Globe actress winner; her show was a sleeper hit that’s also up for Best TV Movie/Limited Series; we’d get some hammy reaction shots from Justin Timberlake; and the Globes can log a win under USA and keep them happy. #neverforget this was the category where the HFPA chose to overlook Kirsten Dunst’s tremendous work in “Fargo” in favor of Lady Gaga (“American Horror Story: Hotel”). Under this scenario, “Big Little Lies” would win the series award, which would still give producer Kidman a Globe.