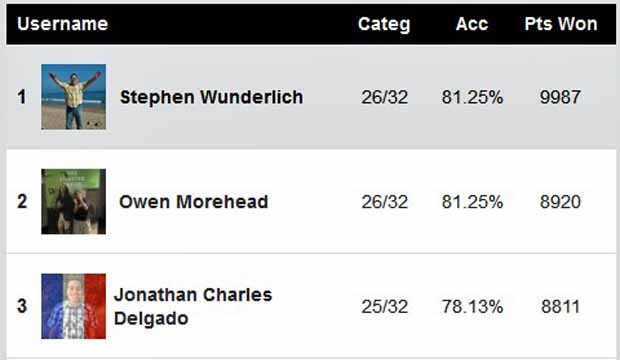 Congratulations to our User Stephen Wunderlich for an impressive score of 81.25% when predicting the 2018 Grammy Awards winners on Sunday. He is actually tied with Owen Morehead with that percentage but has the better point score of 9,987 by using the 500 super bets wisely.

Over 2,100 people worldwide predicted these Grammy champs in 32 top music categories. The awards ceremony was held on January 28 in New York City for the first time in 15 years and was hosted by CBS talk show host James Corden. Our top scorer had only six misses overall, including Album of the Year (picking Kendrick Lamar over Bruno Mars), Record of the Year (picking “Despacito” over “24K Magic”), and Song of the Year (picking “1-800-273-8255” over “That’s What I Like”)

You can see how your score compares to all others in our leaderboard rankings of all contestants, which also includes links to see each participant’s predictions. To see your own scores, go to the User menu in the top right corner of every page of Gold Derby when you’re signed in to the site. Use the drop down menu to go to “View Profile,” then look for the links to your “Award Show Scores.” Gold Derby must evaluate each potential winner’s eligibility as per our contest rules. If eligible, the first-place finisher gets a $100 Amazon gift card.

For the seven Gold Derby Editors participating, Daniel Montgomery is in first place with 71.88%. Joyce Eng is in second with 68.75%. Marcus Dixon, Paul Sheehan and I are tied for the third spot with 65.63%. Tom O’Neil is next with 56.25% and then Rob Licuria with 41.18%. See Editors’ leaderboard.