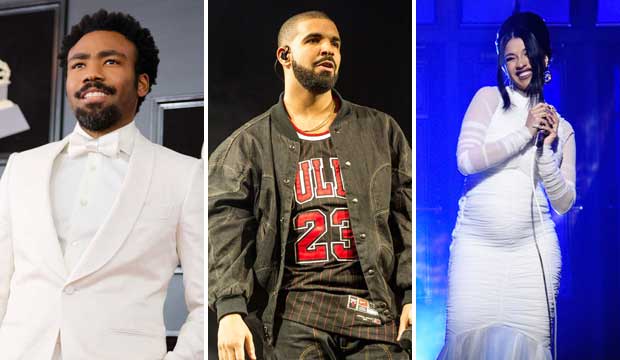 The top three Grammy contenders for Record of the Year according to the combined predictions of nearly 2,000 Gold Derby users are all hip-hop songs. That makes sense since some of the biggest hits of the year have been hip-hop songs, and the recording academy loves big hits like recent dominant chart-toppers “Hello” by Adele and “Uptown Funk” by Mark Ronson and Bruno Mars. There’s one problem, though: hip-hop has never won Record of the Year. Will that finally change?

Topping our predictions as of this writing is “This is America” by Childish Gambino with leading odds of 9/2. The politically charged song and music video were subjects of widespread discussion this past spring and gave Childish his first ever number-one hit on the Billboard Hot 100. It’s been a big year overall for Childish, who started 2018 with Grammy nominations for Record of the Year (“Redbone”) and Album of the Year (“Awaken, My Love”). He won Best Traditional R&B Performance for “Redbone,” which was his first career Grammy victory.

The artist also known as Donald Glover also premiered the second season of his acclaimed FX series “Atlanta” and guest-hosted “Saturday Night Live.” Those two gigs earned him another five Emmy nominations; he didn’t win any this time around, but he still has two Emmys on his mantel from 2017.

“God’s Plan” by Drake ranks second with odds of 15/2. That was the first of three number-one hits for the Canadian rapper in 2018, which has been a dominant year for him on the charts. “God’s Plan” debuted in the top spot in February and stayed there for 11 weeks until he replaced himself at number-one in April with “Nice for What.”

Drake has been cross with the Grammys in the past, arguing against how they categorized his previous hit “Hotline Bling” even though that song ended up winning twice. Last year he didn’t even submit any of his work for Grammy consideration, but this year he’s back in the fold, and with the recording academy taking steps to address diversity in its ranks and in its awards, perhaps Drake’s “Plan” will pay off.

SEEBeyonce denied again? Janelle Monae overtakes her in our Grammy predictions for Album of the Year

Also with 15/2 odds is “I Like It” by Cardi B featuring Bad Bunny and J Balvin. Cardi B earned a pair of nominations in the rap field last year for her breakthrough hit “Bodak Yellow,” but she could be all over the Grammy ballot this year between her own songs and her collaborations with other artists. She’s even forecast for a second nomination in this very category thanks to “Girls Like You” with Maroon 5.

“I Like It” only spent a week at number-one, but it stayed in the top 10 for weeks and ended up at number-two on Billboard’s Song of the Summer chart behind Drake’s “In My Feelings.”

But those hip-hop hits might have to beware of some big pop titles that are more in Grammy voters’ comfort zone, like “Perfect” by Ed Sheeran and Beyonce; “The Middle” by Zedd, Maren Morris and Grey; “Shallow” by Lady Gaga and Bradley Cooper; and the aforementioned “Girls Like You.” Those singles are also among our top eight predicted nominees.

So will Grammy voters make history in this category or stick with what they’re used to?