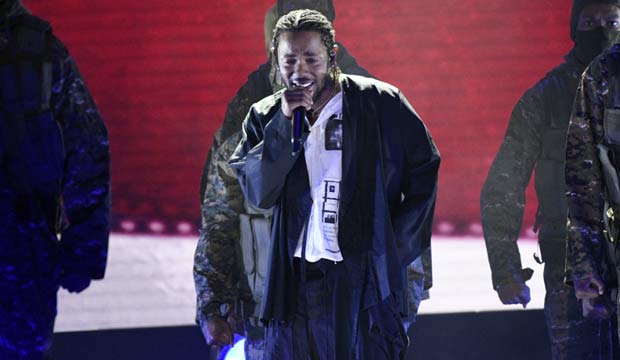 The Grammys have long been criticized for their treatment of rap and other genres primarily associated with people of color. No rap song has ever won Record of the Year or Song of the Year, and only one rap album has ever won Album of the Year (“Speakerboxxx/The Love Below” by OutKast, 2004). This year, even though Kendrick Lamar was considered the frontrunner for Album of the Year for “Damn,” the recording academy delivered yet another shutout to hip-hop artists in the general field. Will there be a revolt? If so, it wouldn’t be the first.

Bruno Mars claimed Album of the Year for “24K Magic” as well as Record of the Year for the title track and Song of the Year for “That’s What I Like.” He is a person of color — of Puerto Rican and Filipino descent — and indeed the Grammy nominating committee went out of their way to avoid a repeat of Adele‘s upset over Beyonce in 2017 by overwhelmingly representing people of color among the nominees in the top three categories. But out of the contenders in those categories the recording academy still went with the most adult-contemporary-radio-friendly option available to them.

So instead of awarding “Damn,” which was the most successful album of 2017 according to Billboard and the best reviewed album of the year according to MetaCritic, they went with a nostalgic R&B throwback that was MetaCritic’s lowest-rated album among the five nominated (with a still-respectable 70, about average for a Mars album) and the third-best-selling of Mars’s own three albums.

Are recording academy members determined to avoid voting for rap and urban music at all costs? And if so, what will that cost be going forward? At the 2017 Grammys Frank Ocean seemed like a serious contender for his acclaimed album “Blonde” until we learned that he didn’t enter his music for consideration at all. Then after Drake objected to his category placement at those awards, he decided not to submit his name for consideration at the 2018 Grammys. Now with Lamar losing Album of the Year for the third time and fellow rap artist Jay-Z losing every single one of his eight nominations, will we see more hip-hop artists snub the Grammys before the Grammys can snub them?

Consider that the motion picture academy, which has demographically skewed a lot older and whiter than the general population, awarded two rap songs with Oscars (“Lose Yourself” from “8 Mile,” “It’s Hard Out Here for a Pimp” from “Hustle and Flow”) before the Grammys have even awarded one with Record of the Year or Song of the Year. Is it time for more rappers and hip-hop artists to take their ball and go home?