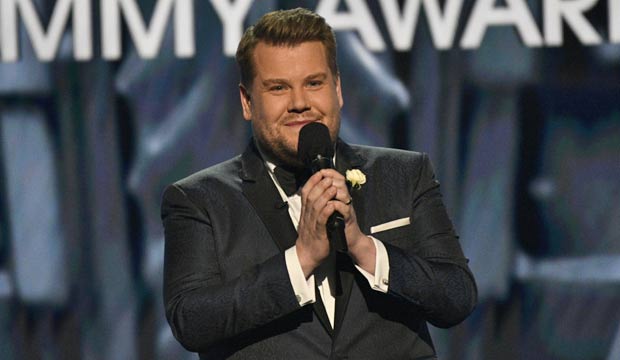 Comedian and “Late Late Show” host James Corden returned to emcee the 2018 Grammy Awards for the second year in a row on Sunday night, January 28, but it wasn’t the same level of showstopping performance he delivered in 2017. How do you think he fared as host this time around? Did he phone it in? Did you love his understated approach? Do the Grammys even need a host? Vote in our poll below, and sound off in the comments. Also, check out the complete list of Grammy winners right here.

Corden kicked things off with an uncharacteristically soft opening: a dry explanation of what sounded like a general itinerary for the night. It was a far cry from his energetic, laugh-out-loud opening last year. Corden was not heavily present throughout the rest of the ceremony either, though he did come through with funny sketches later in the night

After his brief intro Corden engaged in some lighthearted banter with 2018 Industry Icon honoree Jay-Z, joking about their similarities and earning a few chuckles. He earned more laughs following Daddy Yankee and Luis Fonsi’s performance of their ubiquitous hit “Despacito,” exclaiming, “Wow! That’s a great song. I’ve never heard that before.”

Later in the evening Corden got even more of a comedic boost when he was joined by Sting and Shaggy in a sketch that took place on a New York subway — for “Subway Car-pool Karaoke.” It didn’t go over well with disgruntled passengers, and the hilarious skit ended with Corden being punched in the face when he refused to quit singing.

The humor continued to pick up when Corden announced that the losing Grammy nominees would not go home empty-handed. Ushers promptly entered Madison Square Garden and handed out adorable puppies to Jim Gaffigan, Sarah Silverman and Jerry Seinfeld, who had just lost Best Comedy Album to Dave Chappelle. Methinks Jay-Z must be going home with a lot of puppies.

The most memorable moment for Corden came during the night’s last pre-taped sketch in which he auditioned various artists to record a spoken-word album of “Fire and Fury,” the damning tell-all book by journalist Michael Wolff describing chaos in the Donald Trump White House. John Legend, Cher, Snoop Dogg, Cardi B, and DJ Khaled were among the participants, but it was Hillary Clinton‘s appearance at the very end that garnered the most laughs.

Despite those bright spots, though, Corden seemed less engaged in this event than he has been in past awards hosting endeavors.  Do you agree? Vote below to let us know what you thought of his performance.