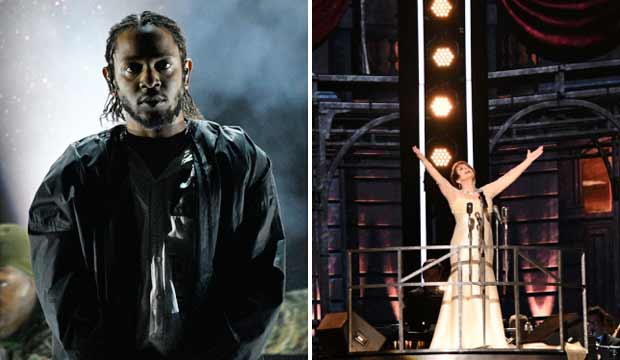 The biggest stars in music gathered inside of Madison Square Garden Sunday night, January 28, to celebrate the 60th Annual Grammy Awards, hosted by James Corden. The three-and-a-half hour spectacle featured performances from entertainers across all genres. Which artist delivered your favorite performance of the night? Vote in our poll below, and check out the complete list of Grammy winners here.

Record and Song of the Year nominees Luis Fonsi and Daddy Yankee took the stage to perform the year’s biggest hit, “Despacito.” The Puerto Rican duo brought some much needed Latin flair to an awards show that felt rather somber throughout the first hour. They performed the song entirely in Spanish and didn’t need Justin Bieber to bring the audience to their feet.

Later Bruno Mars was joined by breakout star Cardi B to perform “Finesse,” their hot new single inspired by ’90s R&B music. The audience was all smiles as Mars proved why he is considered one of this generation’s standout showmen. The dance moves were in full effect: Mars was not ashamed to break out “the running man” mid-song. And Cardi B was a breath of fresh air as she let the rhymes flow in a colorful ensemble that appeared to pay homage to the late Lisa “Left Eye” Lopes of TLC.

DJ Khaled was joined by Rihanna and Bryson Tiller for an equally colorful rendition of “Wild Thoughts.” What made this performance even more interesting was the fact that this song was totally snubbed by the academy. In fact, Khaled and Tiller weren’t nominated for anything this year, though at least Rihanna won earlier in the night: Best Rap/Sung Performance for her collaboration with Lamar, “Loyalty.”

Kesha was joined by an all-star lineup of Cindy Lauper, Camila Cabello, Andra Day, Julia Michaels and Bebe Rexha for a gut-wrenching performance of her powerful song “Praying.” The song has become an anthem for the #MeToo movement after Kesha bravely spoke out about surviving sexual assault and discrimination within the music industry. The singer and several audience members were in tears by the end.

The legendary Grammy and Oscar-winning singer Elton John was joined by a glammed-up Miley Cyrus for a duet of his classic “Tiny Dancer.” The two were celebrating his 50 years in the music business; John is expected to retire after his upcoming “Farewell Yellow Brick Road” tour.

Ben Platt and Patti LuPone gave a salute to Broadway composers Leonard Bernstein and Andrew Lloyd Webber and proved that the best singers in the industry may be in musical theater. Platt began with a soaring rendition of “Somewhere” from “West Side Story.” LuPone then delivered a pearl-clutching re-creation of her 1981 Grammy performance of “Don’t Cry For Me Argentina” from “Evita.”

Other performers included Lady Gaga, Sam Smith, Little Big Town, Gary Clarke Jr. and Jon Batiste, Childish Gambino, Pink, Sting and Shaggy, Eric Church with Maren Morris and Brothers Osborne, U2, SZA, Chris Stapleton and Emmylou Harris, and Logic with Alessia Cara and Khalid. Who stood out to you? Vote in our poll below.