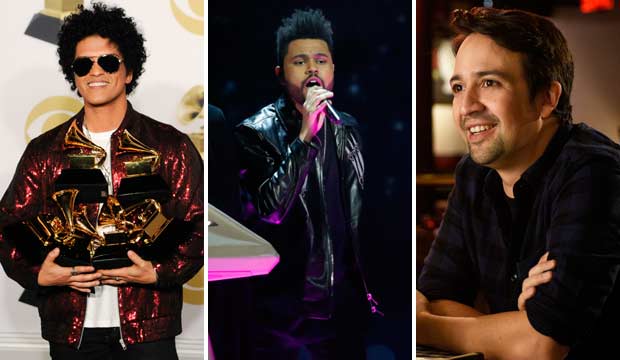 The 2018 Grammy Awards didn’t go entirely as we predicted, with some major upsets in top categories. So what were our top six biggest shockers when awards were handed out on January 28? Find out below, and check out the complete list of Grammy winners here.

THE ENTIRE GENERAL FIELD: Bruno Mars — Leading up to the ceremony, Mars was considered an underdog for Album, Record and Song of the Year, but he won them all anyway. Kendrick Lamar‘s “Damn” was the front-runner for the top album prize with 1/1 odds while Mars’s “24K Magic” was a relative underdog with second-place 5/2 odds. Song of the Year was expected to go to Logic, Alessia Cara and Khalid for “1-800-273-8255” with 8/11 odds, but Mars’s “That’s What I Like” took the prize despite its second-place odds of 9/2. Perhaps the most shocking upset was “24K Magic” winning Record of the Year with third place odds of 11/2 against “Despacito” by Luis Fonsi, Daddy Yankee and Justin Bieber, which had leading odds of 2/3, and “Humble” by Lamar, which was next with 4/1 odds.

BEST ROCK ALBUM: “A Deeper Understanding,” The War on Drugs — The War on Drugs had the night’s biggest upset based on our forecasts when their album “A Deeper Understanding” won Best Rock Album, overcoming distant third-place odds of 25/1. Metallica‘s “Hardwired…To Self-Destruct” was way out front with 2/13 odds, followed by Queens of the Stone Age‘s “Villains” at 18/1.

BEST ALTERNATIVE ALBUM: “Sleep Well Beast,” The National — The National won Best Alternative Album for “Sleep Well Beast” despite being ranked fourth in our predictions with overall odds of 20/1. They took down front-runners LCD Soundsystem (“American Dream”) who led with 8/15 odds, Arcade Fire (“Everything Now”) at 5/1, and Father John Misty (“Pure Comedy”) at 10/1. Gorillaz (“Humanz”) rounded out the category with 28/1 odds.

BEST URBAN CONTEMPORARY ALBUM: “Starboy,” The Weeknd — The Weeknd shocked Childish Gambino by taking home Best Urban Contemporary Album for “Starboy” despite being ranked third with odds of 14/1. Gambino’s “Awaken, My Love” was also nominated for Album of the Year, so most assumed he would win this category with no contest: he had odds of 4/9. SZA (“Ctrl”) was in second place with 7/2 odds. Khalid (“American Teen”) and 6LACK (“Free 6LACK”) rounded out the category with 50/1 and 100/1 odds, respectively. They all had more nominations than The Weeknd, who competed in no other categories besides this one.

BEST VISUAL MEDIA SONG: “How Far I’ll Go” from “Moana” — One should never count out Lin-Manuel Miranda in an awards contest, but he still took us by surprise when “How Far I’ll Go” from “Moana” defeated “City of Stars” from “La La Land” for Best Visual Media Song despite trailing in our predictions with 8/1 odds. Oscar winners Justin Hurwitz, Justin Paul and Benj Pasek were expected to win for “Stars” with odds of 2/9. This marked the third Grammy for Miranda; he still just needs to snag an Oscar to EGOT, so he might have preferred to pull off this upset this time last year at the Academy Awards.