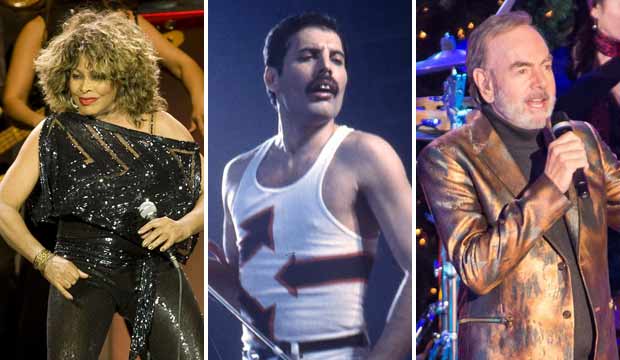 Blaine was well known as a drummer from the group of session musicians known as The Wrecking Crew, and he worked with artists ranging from Elvis Presley to Frank Sinatra. Diamond has been a longtime chart-topping favorite known for songs like “Sweet Caroline,” “America,” and “You Don’t Bring Me Flowers,” but he has only ever won one competitive Grammy in his career: for his original film score for “Jonathan Livingston Seagull” (1974). Harris, however, has won 13 competitive Grammys over the course of her career, including Album of the Year in 2002 for her contributions to the “O Brother, Where Art Thou?” soundtrack.

Jordan was known as “King of the Jukebox” during his heyday from the 1930s to the 1950s, when he was a pioneer in rock and R&B and performed with the likes of Bing Crosby, Ella Fitzgerald, and Louis Armstrong. The Meters were pioneers in the funk genre, who collaborated with the Rolling Stones, Dr. John, Allen Toussaint, and more.

The band Queen, led by the late Freddie Mercury, formed in the 1970s and are still famous for their rock anthems “Bohemian Rhapsody,” “We Will Rock You,” “We Are the Champions,” and more, though they never won a competitive Grammy for their work. But Turner has eight Grammys, including Record of the Year in 1985 for her classic song “What’s Love Got to Do with It” and most recently Album of the Year in 2008 as a featured artist on Herbie Hancock‘s “River: The Joni Letters.”

“This year’s Special Merit Awards recipients are a prestigious group of diverse and influential creators who have crafted or contributed to some of the most distinctive recordings in music history,” said recording academy president and CEO Neil Portnow in a statement. “These exceptionally inspiring figures are being honored as legendary performers, creative architects, and technical visionaries. Their outstanding accomplishments and passion for their craft have created a timeless legacy.”

Those Special Merit winners also include the recipients of Trustees Awards for achievements in areas other than performance: rock concert pioneer Bill Graham, Sire Records founder Seymour Stein, and Oscar and Grammy winning composer John Williams. Technical Grammy Honorees are Tony Agnello and Richard Factor, who have invented a variety of audio effects devices through their company Eventide.