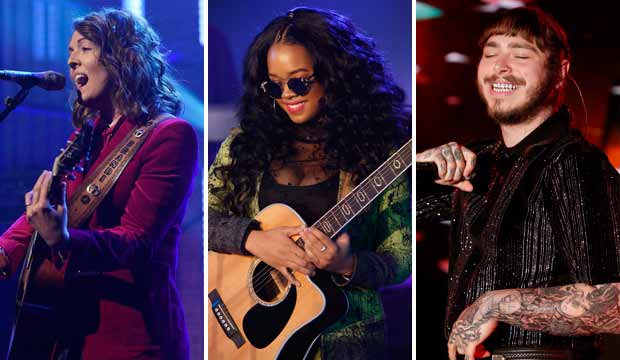 With the general field categories at the Grammys expanded to eight nominees each for the first time in  history, there were lots of unexpected results. Big names like Taylor Swift, Ariana Grande and Beyonce were snubbed from the top four categories, and in their place were some big surprises. Scroll down for the biggest shockers for Album of the Year, Record of the Year, Song of the Year and Best New Artist, and check out the complete list of nominations here.

Foremost among the surprises was the breakthrough for singer-songwriter Brandi Carlile. Before this year she only ever contended for one award: Best Americana Album for “The Firewatcher’s Daughter” in 2016. But this year she’s one of the top nominees across all genres with six bids including Album of the Year for “By The Way, I Forgive You” and Record and Song of the Year for “The Joke.” We didn’t see any of those nominations coming; she had 100/1 odds in all three of those categories based on the combined predictions of thousands of Gold Derby users.

SEE2019 Grammy nominations list: All the nominees for the 61st Grammy Awards

But the Album of the Year nomination for singer H.E.R.‘s self-titled album was so unexpected she wasn’t even in our predictions center. It was released more than a year ago, back on October 20, 2017, just a few weeks into the Grammy eligibility period (October 1, 2017 to September 30, 2018). It peaked at number-47 on the Billboard 200 albums chart, but I have a feeling we’ll see it rise higher than that as the Grammys approach. H.E.R. was also nominated for Best New Artist, but we knew she had a shot at that prize.

Post Malone surprised us too, but maybe he shouldn’t have. His sophomore album “Beerbongs and Bentleys” was a blockbuster, but the reviews were divided, so we didn’t predict his nomination for Album of the Year, especially since the final decisions in the general field categories are made by nomination review committees that often look beyond name recognition and record sales (see above re: Brandi Carlile and H.E.R.).

SEEGrammys most shocking snubs: Taylor Swift and Ariana Grande skunked in top categories, and no ‘Love’ for Beyonce and Jay-Z

OUT OF NOWHERE
This was the only nominee so surprising that it wasn’t in our predictions center.

BIG SHOCKERS
These contenders were nominated despite distant 100/1 odds

Album of the Year
“Beerbongs and Bentleys,” Post Malone
“By the Way, I Forgive You,” Brandi Carlile

Record of the Year
“The Joke,” Brandi Carlile

Song of the Year
“The Joke,” Brandi Carlile

CLOSE CALLS
These nominees didn’t number among our top eight predicted nominees, but they were close.

Record of the Year
“All the Stars,” Kendrick Lamar and SZA
“Rockstar,” Post Malone feat. 21 Savage

Song of the Year
“All the Stars,” Kendrick Lamar and SZA
“In My Blood,” Shawn Mendes