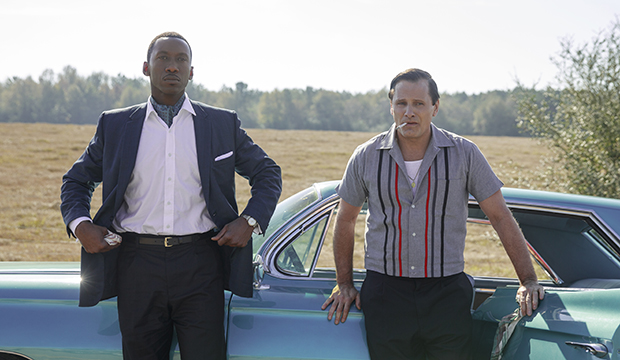 Take this as a sign of awards-season bravado. “Green Book” will now open in limited release in 20 cities across the country on November 16 and go wide on November 21, its original date of release. Considering the enthusiastic reception that the crowd-pleaser directed by Peter Farrelly of “Dumb and Dumber” fame has received at festivals, it makes sense to move up the timing to take advantage of that momentum before it goes nationwide the day before Thanksgiving.

The true story that takes place in the segregated Deep South in the early ’60s has been compared to 1989’s Best Picture Oscar winner “Driving Miss Daisy” –but with a bit more edge. Part comedy and part drama, the film portrays the bond that grows between polished black pianist Don Shirley (Mahershala Ali, Academy Award winner for “Moonlight”) and Tony Lip (two-time Oscar nominee Viggo Mortensen), a rough-around-the-edges Italian night-club bouncer he hires to be his chauffeur and protector during a concert tour.

Universal Pictures has reason to be confident about word of mouth getting out. “Green Book” won the coveted People’s Choice Award — often a bellwether for other prizes to come — when it had its world premiere at the Toronto International Film Festival in September. In fact, it just won for its ensemble and screenplay at this past weekend’s Hollywood Film Awards. Right now at the Gold Derby prediction center, the film is ranked fourth among the titles vying in the Best Picture race  when picks made by Experts, Editors and Users are combined. Mortensen is No. 3 among the Best Actor candidates while Ali is perched on top of the likely supporting actors list.

SEE‘Green Book’ vs. ‘A Star Is Born’ vs. ‘Black Panther’? Gold Derby editors slug it out over the Best Picture contenders