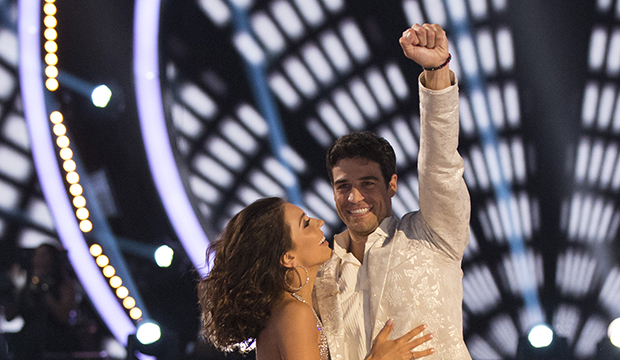 Grocery Store Joe won’t be an Average Joe when it comes to “Bachelor”-“Dancing with the Stars” contestants. In fact, he’ll be better: 44 percent of our readers believe that Joe Amabile will have the best placement of any male “Bachelor” alum who’s hoofed it on “Dancing.”

Joe certainly has the fan support to carry him far, as everyone saw last week when Bachelor Nation helped him overcome a score of 14 — the lowest of the night — to not even place in the bottom six. Joe, who quickly became a fan favorite “The Bachelorette” and “Bachelor in Paradise,” is the fifth male star from the “Bachelor” franchise to compete on “Dancing,” but he’s the first who has not been the Bachelor. That may help him since he hasn’t had a chance to turn off fans with any questionable decisions cutting women and picking his future bride. As the lovable guy eliminated in the first episode of “The Bachelorette,” he has far more sympathy than his “Bachelor”-“Dancing” brethren, Jake Pavelka, Sean Lowe, Chris Soules and Nick Viall, who finished with an average “Dancing” placement of sixth; Chris had the best finish in fifth place.

SEE Yikes! Was ‘Grocery Store Joe’ as bad on ‘Dancing with the Stars’ as the judges said? [WATCH]

Sixth place is what 41 percent of you are forecasting for Joe and his partner Jenna Johnson. If Joe doesn’t vastly improve his technique and his scores, it will eventually become difficult for him to go further solely on the back of votes. It just becomes a numbers game at a certain point, and right now, there are better dancers than him who will probably still be better dancers than him five weeks from now, so a middle boot is a plausible guess.

The remaining 15 percent, however, are predicting an early exit for Joe. That may be more of a wish than a prediction, but maybe Bachelor Nation will die down? Unlikely.