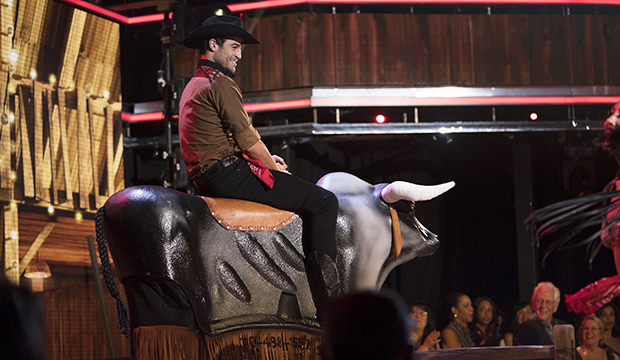 Joe “Grocery Store Joe” Amabile has notched some dubious milestones during his improbable run on “Dancing with the Stars,” but he might hit an ostensibly positive one soon: If he makes it through next week’s semifinal, he’d be the first male star from the “Bachelor” franchise to advance to the final.

There is an asterisk to this potential achievement. If the show cuts just one couple in the six-couple semifinal, then there will be a first-ever final five. The previous four “Bachelor” dudes competed on seasons with a final three or four, and none of them made a semifinal. In terms of actual placements, Jake Pavelka finished seventh in Season 10; Sean Lowe, sixth in Season 16;  Chris Soules, fifth in Season 20; and Nick Viall, sixth in Season 24.

SEE Will Grocery Store Joe make the ‘Dancing with the Stars’ final?

Grocery Store Joe has already surpassed Pavelka’s finish, and would leapfrog over Lowe and Viall and tie Soules with a final five showing. Can he do better than that? After the premiere — which he survived thanks to Bachelor Nation despite scoring a 14 and wasn’t even in the bottom six — 44 percent of our readers predicted that Joe would have the best placement of all the male “Bachelor” stars on “Dancing.” So we are on track for that to happen.

But few probably could’ve foreseen how little Joe has improved this season or how truly bad he would actually be. Pavelka, Lowe, Soules and Viall weren’t fantastic dancers either, but they look like Baryshnikov compared to Joe. They also all had better scores  — Joe’s season average is still sub-20 — but ultimately the fan votes weren’t there to make up the spread between them and their respective seasons’ top contenders.

Joe wouldn’t be the first overall “Bachelor” franchise alum to make the final though: Melissa Rycroft finished third in Season 8 and won the all-stars installment.