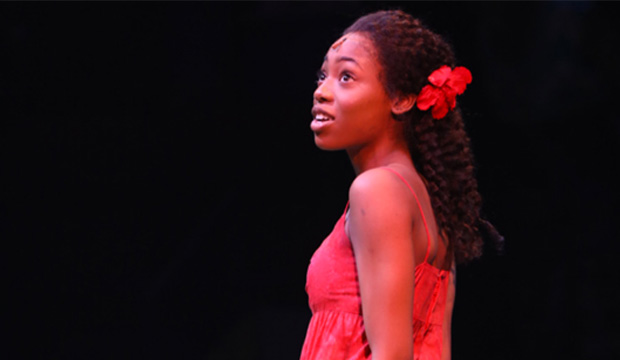 Most actors have to wait and “pay their dues” before contending at the Tony Awards, but Hailey Kilgore could buck that old industry adage and reap a bid for her Broadway debut in  “Once on This Island.” With an immersive, in-the-round staging, “Once on This Island” takes the shape of a Caribbean fable.

Kilgore’s character, Ti Moune, survives a fearsome storm as a young girl and is raised by adoptive parents. One night she rescues a boy Daniel (Isaac Powell) from the wealthier side of the island, after a car wreck. Despite warnings from her parents that an upper class man will never truly care for a peasant, Ti Moune falls in love with Daniel. The situation is made trickier by the gods of the island. Erzulie, Goddess of Love (Lea Salonga) makes a bet with Papa Ge, God of Death (Merle Dandridge) that love can conquer death. Thus, a quartet of island deities intervene in Ti Moune’s affairs, trying to guide her towards destiny.

A worldwide casting search was held to find Ti Moune and Kilgore nabbed the part. She now carries an entire musical on her shoulders at just age 18. To the audience the task looks effortless. The actress earns rapturous applause as she makes her entrance from a watery tunnel in “One Small Girl,” trading places with the girl playing a younger version of the character. Her powerful voice fills every inch of the Circle in the Square Theater. When tragedy befalls the her, the audiences’ hearts sink. There are few characters on Broadway right now that you root for as much as Kilgore’s Ti Moune.

She received raves across the board. David Rooney (Hollywood Reporter) claims “Newcomer Kilgore is a delight, embodying both strength and vulnerability with a natural exuberance that never feels forced.” And Jeremy Gerard (Deadline) thinks “Kilgore, like this revival itself, is no imitation but a triumph in her own right, striking exactly the right balance between innocence and spirituality, youth and experience. She’s just wonderful.” Marilyn Stasio (Variety) points to one iconic dance that sums up Kilgore’s accomplishments: “With “Ti Moune’s Dance,” 18-year-old Kilgore (in a stunning red gown) flies into a wild calypso number that graphically reveals the depths of Ti Moune’s feverish love for the thing of beauty she can’t possess.  The same number should also clinch the future theater career of this thrilling young talent.”

The role also has a history with the Tonys. “Once on This Island” made a star out of LaChanze, who was nominated for Featured Actress in a Musical for the original production. The entire cast competed in the Featured acting categories then, but this time around the Tonys rightfully bumped Kilgore up to lead. In a twist of fate, Kilgore could actually face off against LaChanze who will contend in the same category for “Summer: The Donna Summer Musical.”

Other positive awards vibes surround the production in the form of Salonga. This veteran performer knows about carrying a show at a young age, having opened “Miss Saigon” in the West End at age 18, before bringing the production to Broadway and winning a Tony Award.  Perhaps Salonga can provide some divine intervention like her character Ezrulie to help out Kilgore.

The newcomer will need any and all help she can find to overcome stiff competition for a Lead Actress win. She currently sits in third place in Gold Derby’s combined odds, just behind formidable performances from Katrina Lenk (“The Band’s Visit”) and Lauren Ambrose (“My Fair Lady”). Those actresses are more familiar names to the New York theater community, and may have an edge. But Kilgore turns in an astounding performance, made more impactful by the intimate setting which gives her nowhere to hide on stage. Kilgore may face seasoned competition, but the actress is giving an infectious performance beyond her years.