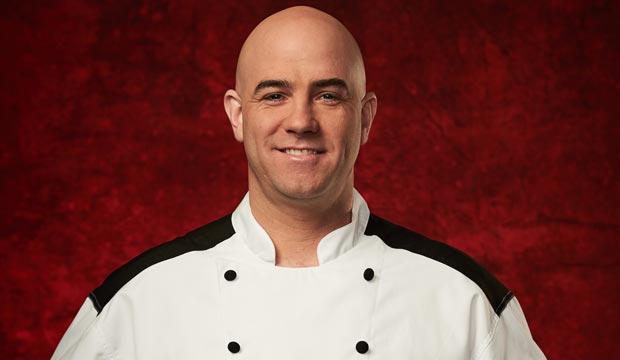 “Hell’s Kitchen” is back on home base on Fox after skipping a week due to the World Series. Just to jog your memory, the  previous episode had a whole lotta shaking-up going on as Chef Gordon Ramsay decided to deep-six the Rookies vs. Veterans premise of Season 18 after both teams stumbled through dinner service. Now, the Red Team  is all male and the Blue Team is all female.  We will soon see how that works out on Episode 5, “Fish Out of Water.”

9:00 p.m. The recap of last week made me nostalgic after seeing  how the Rookies came on strong in that weird snow-themed  challenge involving soup and hearing the All-Stars grouse about always losing. Shock, awe and a lot of smoking followed in the wake of Chef Ramsay’s switcheroo of the players. As Ex-Veteran Bret Hauser put it so elegantly, “That was unexpected as ‘bleep.’”

9:03 p.m. Ex-Rookie Chris Mendonca tells the Ex-Vet fellows, “I’m happy you’re on our team,” suggesting that they won’t have to dance around girls’ emotions. “We are going to be direct as men.” Yeah, right. Or as Trevor McGrath opines, “We’ve got each other’s backs. Bros before ho’s.” Cliché much?

SEE93% of ‘Hell’s Kitchen’ fans are thrilled Jen Gavin flamed out early: It was her time to go [POLL RESULTS]

9:05 p.m.  Meanwhile, the more mature Red Team members, Kevin Cottle and Jose DeJesus, talk with Mia Castro without any cootie fears. She asks Jose, “Do you have kids?” Turns out he does, a daughter, 11, and a son, 4. And he admits he is doing the show for them. Kevin responds, “Life changes when you have kids, man.” Indeed.

9:06 p.m. “We have a very special guest today,” says Chef Ramsay as the new teams gather in the restaurant. “I’d like you to meet a Grammy-nominated composer.” He must mean the dude sitting at a piano. “He’s written for Miley Cyrus – you remember the song, ‘Wrecking Ball?’ And he has also written for Celine Dion. Please welcome Stephan Moccio.” He is using this guest as an example of someone who is at the top of his game and possesses great versatility. “Stephan here is comfortable playing in the classical style” – cue music. “Rock ‘n’ roll!” – cue more music. “The blues.” – yes, more ivory tinkling.

9:10 p.m. “A great musician is like a great chef – he has the ability to work across a wide variety of styles.”  The challenge? “Each team will work with the same incredible protein cooked in seven different ways. Steamed, wood-burning oven, baked, grilled, poached, hot-smoked, pan-seared and shallow-fried.” And the protein – fish. Marino rolls out a wagon full of smelt. Smelt? Really? No. Suddenly, what I presume is a giant halibut falls from the ceiling because that is the actual protein.

DISCUSSWhich Season 18 returning chef is most deserving of a second chance?

9:12 p.m. And they are off. Each contestant gets just one piece of fish — as sous chef Jocky notes, “No margin for error.” Chris does a steamed fish in parchment. T Gregoire is making a stock for deglazing. Scotley Innis oddly asks if there is yellow food coloring. Sous chef Christina sasses back, “It’s not an Easter egg challenge” and suggests turmeric. Gizzy Barton‘s grilled fish is not looking good and is falling apart.

9:16 p.m. Los Angeles chef and Michelin star restaurant owner David LeFevre is the guest judge during this round. Each of the seven styles of cooking goes head to head. Gizzy, whose flavor is great, is up against Bret, whose fish is dry from using soy. She claims she meant to cut her halibut in three pieces for even cooking. The ladies earn a win. Steamed pits Chris against Mia. Mia pours her broth tableside-style to Chris’ chagrin. “I can’t wait to squash her.” Chris unwraps his parchment and LeFevre is pleased BUT he needed more aromatic fixings. Another point for the gals. Poached is next with Kevin and Roe. Finally, one for the boys. Hot-smoked? Scotley vs. Kanae Houston. Lack of smoke flavor dooms Scotley and the ladies are killing it. Shallow fried? Ariel-Contreras-Fox‘s fish pops. Jose’s is equally good. They both get a point. Pan-seared next as Motto faces off with Heather Williams.  Heather’s plate lacks seasoning. The score: 4-3. The men need a point to tie.

9:20 p.m. The last showdown? Fish done in a wood-burning oven. T is up against Trevor. He actually says, “I’m excited to bury this bitch.” What a gentleman. Says LeFevre , with a wink: “The fish is super tasty – to a T.” As for Trevor, he gets a “great.” But it’s a home run for T and the women. They are going to be traveling to a skyscraper 100 stories above the ground, walk a narrow plank from the top of the building and, if they survive, they will fight the zombie apocalypse. Wait. This is a reward? Yes, a virtual reality experience reward. What will the men be doing. Dealing with a dumpster brimming with manure and replace it with the kitchen trash and mix it with the poop. Alas, it isn’t virtual. Neither is the smell.

SEEMeet the cast members of Season 18 of ‘Hell’s Kitchen’

9:30 p.m.  Time for dinner service. Tableside, it’s muscles in a saffron broth served by Chris and Heather. Be prepared for the lobster wellington calamity that has been seen in previews. T gets in trouble early with her scallops and Ariel is getting bossy. But T recovers and Heather is a tableside pro. Chris, however, has no takers and becomes a nuisance in the kitchen and messes up the scallops.

9:35 p.m. Mia is beset with underdone wellingtons and she keeps butchering them, ruining the entrée flow. Chef Ramsay reminds her she should cut the ends off to test doneness.

9:37 p.m. Scotley isn’t paying attention to his teammates when it comes to garnish.

9:40 p.m. As for the women, lamb is running behind. Gizzy is oddly nervous and as T says, “You’ve got to cook with confidence.” Lo and behold, Gizzy delivers a lamb chop that Ramsay calls, “perfectly cooked.” He tells T to let her and Mia run the meat station by themselves.

9:45 p.m. Kevin turns his salmon filets into, excuse the expression, “bleeping rubber.” Ramsay banishes the Red Team into the storage room to sort out their differences. Trevor, who thinks he is funny, “Is this the Red Team I know, no it’s not. Is it over? No it’s not. Was it over when the Germans bombed Pearl Harbor? No, it’s not over yet.” I know John Belushi and, you are no John Belushi.

9:47 p.m. Alas, the sauce for the wellington produced by the Red Team has gone cold and Ramsay angrily tosses the pitcher. Then he tosses the chefs out of the kitchen and orders them to pick people they want to get rid of. As for the female Blue Team, they get their acts together and then some. Ramsay calls over Gizzy and tells her, “When you cook like that, everything is absolutely on point. Why you holding back?” He says she can cook, but he’s looking for a leader. She blames her self-doubt.

9:54 p.m. The most problems were at the fish station, but Kevin points the finger at Scotley and his garnish. Chris goes after Scotley and Bret, who was responsible for the cold sauce.  Motto says ditto.

9:57 p.m. Scotley and Kevin, two of the more skilled male cooks, are in danger. They make their cases. Person leaving is, surprise, Kevin. Ramsay says he is nowhere near as hungry as the last time he was on the show as the Season 6 runner-up, adding, “Do not ever underestimate the importance of being passionate. When you give up, I’m going to give up on you.”  Next week: Soap opera is served as Heather and T, who have a budding friendship, get into a grudge match of sorts.