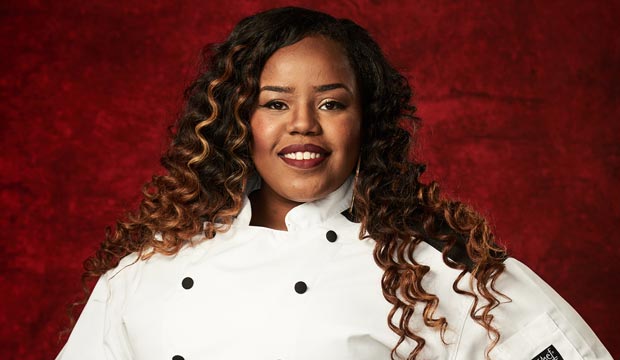 “Hell’s Kitchen” Season 4 favorite Jen Gavin was given a second chance to claim the crown during this year’s “Rookies vs. Veterans” theme, but she ended up squandering her shot when she accused Chef Gordon Ramsay of lying. In Friday’s episode, Jen went into a fiery outburst after her duck garnish went missing, even going so far as to blame Ramsay for sabotaging her. Before dinner service was even over, Ramsay had sent Jen home in Season 18’s most shocking elimination so far. Are YOU happy that Jen flamed out early? Vote in our poll below.

For his part, Ramsay stood up for himself and refused to let Jen’s accusations get to him. “How dare somebody accuse me of sabotaging their garnish, an attempt to soil my reputation,” he told the remaining rookies and veterans after dinner service was completed. “I respect your commitments, but I am not going to be accused of sabotaging anybody. Is that understood? Okay, she’s gone.”

Because the Red Team and the Blue Team completed dinner service, and because Jen was sent home early, Ramsay decided not to eliminate another chef. Thus, both “Hells Kitchen” Season 18 teams are currently tied at seven chefs apiece after Scott Popvic was fired in last week’s episode.

“Jen accused me of sabotaging her,” Ramsay declared at the end of the hour as he hung up Jen’s jacket and her photo turned to flames. “The truth of the matter is, the only thing that sabotaged Jen tonight was her cooking.” Jen previously came in fourth place back in Season 4, when Ramsay eliminated her for her lack of team work skills. Based on Jen’s actions in this episode, it doesn’t look like she learned anything from her past mistakes.