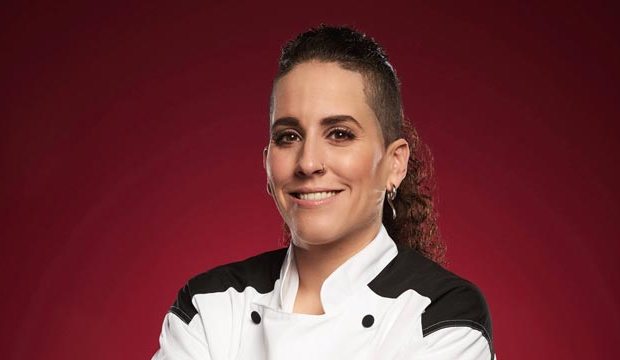 Episode 13 of “Hell’s Kitchen All Stars” aired Friday night on Fox, with host Gordon Ramsay narrowing the field of aspiring chefs from five down to the Top 4. In this week’s episode of the reality TV show, the remaining players taught athletes how to prepare their signature dishes by using only verbal commands. Gold Derby’s exclusive odds predicted that Robyn Almodovar would be eliminated in fifth place — were we correct?

Below, check out our minute-by-minute “Hell’s Kitchen” recap of Season 17, Episode 13, titled “Stars Heating Up Hell.” Then be sure to sound off in the comments section about your favorite contestants and who you think can go the distance to win this season’s prize of a head chef position at the Gordon Ramsay Hell’s Kitchen Restaurant at Caesar’s Palace in Las Vegas, Nevada. Keep refreshing/reloading this page as we’ll be updating live.

7:59 p.m. – Previously, on “Hell’s Kitchen”! Back in the 12th episode, Ramsay named the Final 5 — Robyn, Nick Peters Bond, Milly Medley, Benjamin Knack and Michelle Tribble — by giving them their signature black jackets. From this group, who will Ramsay tell to turn in their jacket in fifth place? Let’s find out.

8:10 p.m. – After the final five toasted their success, it was quickly back to business as Ramsay informed them today’s challenge would test their ability to teach. Their special pupils turned out to be a brigade of former all-star athletes. The chefs would be instructing their partners how to cook their signature dishes. With just 45 minutes, there was no time to waste! Jordyn Wieber (paired with Nick), Ricky Williams (paired with Milly), Candace Parker (paired with Michelle), Shawne Merriman (paired with Benjamin) and Reggie Miller (paired with Robyn) would make or break these all-star chefs and prove who has what it takes to be a mentor.

8:25 p.m. – After the contestants plated their dishes with their superstar sous chefs, it was time for Ramsay to judge the results. Nick and Jordyn received glowing reviews, taking a seat at the leader’s table, hoping nobody would replace them. Robyn and Reggie were next and quickly out-shined their predecessors and became the new Kings of the Hill. Ramsay loved the results of Milly and Ricky’s dish and they were next to move into first place. Candace cooked Michelle’s sea bass to perfection and yet again, their was a new leader. The final pair was Benjamin and Shawne, who delivered a delicious lamb, but it couldn’t overtake Michelle and Candace, who were declared the winners of this challenge!

8:35 p.m. – The final five chefs are now preparing for their first dinner service together in one kitchen. One very special diner was music superstar, Wyclef Jean, who was seated at the Chef’s Table. Milly appeared completely disheveled, but remained confident and Ramsay loved his food, much to the chagrin of his competitors.

8:45 p.m. – Just 45 minutes into the first Black Jacket dinner service, Robyn’s underwhelming couscous had Ramsay fuming, but she quickly recovered. Benjamin was the next on Ramsay’s hit list for not speaking with enough authority. Soon, it was Robyn losing her cool once again as too many demands appeared to be coming her way. Will she be the next chef to hand in her jacket?

8:55 p.m. – Things only got worse for Robyn who turned in Brussels sprouts that resembled “rabbit turds.” Eventually, the service was complete and Ramsay was pleased with the results. Michelle was the only chef to have a flawless dinner service and was given the task of nominating two of her competitors for elimination. After interviewing each of her rivals, Michelle nominated Robyn and Milly.

8:59 p.m. – After each chef pleaded their case, Ramsay eliminated Robyn from Hell’s Kitchen. On her way out the door she exclaimed “I’ll see you on the street Milly.” No love lost there. Tune in next week to see which of the Final Four is the next to go home.