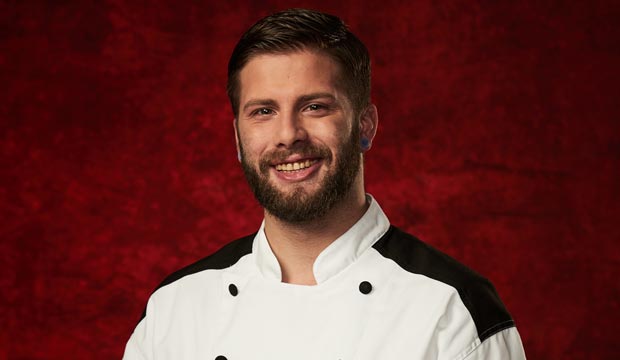 Season 4 returnee Jen Gavin couldn’t stand the heat she was getting from Chef Gordon Ramsay last week on “Hell’s Kitchen” after their kerfuffle over missing duck garnish, and her mouthing off got her sent packing. That means both the Veterans and the Rookies have lost one chef-testant now.

To cool things off, this week’s episode is titled “When Hell Freezes Over,” which could also be the answer to the question of when Jen might be invited back. As Rookie Chris Mendonca says, “That’s loony tunes at its finest, bro. Jen had an opportunity that people would kill for. To come back and she spits on Chef Ramsey’s face like that? What the (bleep) were you thinking?” Below, check out our “Hells Kitchen” recap for Season 18, Episode 4 that aired Friday, October 19 on Fox.

Jen soon becomes stale news, however, as Chris and his Red Team mates Jose DeJesus and Scotley Innis hit the hot tub area and start talking about Season 18’s “sexy ladies.” Chris proclaims that Mia Castro “has a big-ass bootie.” Which is sort of redundant, but whatever. Meanwhile, Mia decompresses with Veteran Trevor McGrath after a difficult service. “I’d rather just shut my mouth and do the best I can do, which is what I usually do,” she says. They both agree it is better to be underestimated than on top. “Everyone is pleasantly surprised when you succeed,” Trevor notes. “Or unpleasantly surprised,” adds Mia with a smile. “Bring it on!”

The chefs are handed either a red or blue long-sleeved fleece jacket from the sous chefs. A puzzled Kevin Cottle observes they are in 90-degree LA. Mia says, “I feel like something dirty is going to happen.” Not quite. More like something that is as pure as the man-made snow that flutters down upon the set. Chef Ramsay is all smiles as he announces, “We have a bit of a competition.”That turns out to be the first-ever Hell’s Kitchen sled race. It’s a relay, with two people in a sleigh with one person pushing. They might not be ready to compete in the Olympics, but the Vets outdo those spry Rookies.

The challenge dish is the perfect treat on a cold winter’s day – soup. And not just any soup, but an “incredible, mind-blowing” bowl of soup, according to Ramsay. The chefs will be cooking outdoors in a “Hell’s Kitchen” version of a winter wonderland. Scotley is ready to slurp his way to victory, proclaiming that in his lead line-cook days, they called him “The Soup Man.” “If you can make a good soup, you can be a great chef,” he says.

Oh, and what is the Blue Team’s advantage? A 10-second head start in picking ingrediants. Really? Gordon is more Grinch than Santa. Returnee Roe DiLeo is making Vietamese-inspired pho and notes it is hard to make a stock in just 45 minutes. Newbie Chris is whipping up spicy butternut squash soup. Bret declares his pancetta is “popping” for his pasta fagioli. Before you know it, Ramsay is counting down the seconds and soup’s on. Judging their food is two-time James Beard Award winner Traci Des Jardins. The other judge is Olympic gold-medalist figure skater Brian Boitano. Says Roe, with a smile, “I know what Brian Boitano is going to do. Give me a perfect score.” And I am going to do a triple-toe-loop.

SEEKevin Cottle and T Gregoire are the ‘Hell’s Kitchen’ veterans who MOST deserve a second chance, say readers [POLL RESULTS]

Did you know there has never been a soup challenge before on “HK”? Well, now you do. The guest judges and Chef G will each rate the bowls on a scale of 1 to 3. The Veterans are up first. Trevor serves a carrot and coconut soup with a Cajun curried shrimp. He gets a “very nice” from Des Jardins. Boitano likes the texture of the crunchiness with the creaminess. He nabs a 6 for the Blue Team. Heather Williams delivers an andouille and lobster corn chowder. Des Jardins is pleased with the spiciness – “It’s got a good kick.” She gets an 8. Ariel Fox is next with yummy-looking fried-chicken miso ramen, which makes me wish this show was in taste-o-vision. Des Jardins says, “Great textures. I like the perfume of the seaweed.” Boitono raves about its funkiness.” Give 7 more points to Blue.

T Gregoire puts out an Appalachian-inspired stew with celery and spicy pickled shrimp. Boitano raves about the chicken skin on top. She gets a near-perfect 8. New Englander Kevin does another “chowdah,” but Boitano docks him for not having any “errant clams” swimming about. He gets a 6. Roe serves her pho as Ariel reminds that the Veterans have yet to win a challenge. Roe gets slammed for lack of salt, body and acid for a weak 3. Last is Bret Hauser with a tomato basil and orzo soup with pancetta. Des Jardins asks, “What kind of tomatoes did you use?” Since the answer unfortunately is “canned,” it’s time to cut to Ramsay saying “bleep!” Needless to say, Bret gets a 3.

Can the Rookies beat the Veterans’ score of 41? Mia is up first with a brown butter and butternut squash soup with crispy Brussel sprouts. “Very, very nice,” says Des Jardins. Ramsay likes the marriage between the sprouts and the croutons fried in brown butter. He basically says, “I do.” “Amazing,” declares Boitano in between gulps. Mia gets a perfect 9. Motto is up next with his southern spiced sweet potato soup. He gets a 6. Gizzy Barton impresses the Olympian with pickled fennel, who declares it a “nice touch!” She gets a perfect 9. Chris has yet another butternut squash soup but with fried tomatoes and jalapeno tossed in brown sugar. The judges all have the look of “ugh” on their faces as they deliver a 3.

Jose ladles some soy miso soup and vegetables. He gets a “lovely” from Des Jardins and an 8. Scotley is next up with saffron potato leek with crispy Brussel sprouts and buttered poached lobster knuckle and tail. Des Jardins likes that it has “a nice little airiness to it.” He gets an 8 and it’s all over for the Blue Team with one soup still left to taste. Kanae Houston pushes the Rookie score over the top with her roasted mushrooms and gets a 9.

The winning Red Team are allowed to take both the day and night off while lazing at a resort and spa in Palm Springs. Meanwhile, the Blues get bluer when they learn that that snow has be shoveled up and all 30 tons of it has to be transported. Bret apologizes for letting his team down – over and over again. Oh, woe is he. Trev has a point when he says, “Suck it up, buttercup.” In the nick of time, we get to hang out with the Reds during their spa getaway. Let the champagne cork-popping and pool-splashing begin. The boys start giggling as they spy Kanae’s revealing attire. “My husband would kill me if I didn’t have a cover-up,” she says, even though said cover-up covers up not so much.

Back at HK headquarters, the Veterans are shoveling away while Mr. Canned Tomatoes is still in a funk. “Bret is a roller coaster of emotions”, says Heather, “And I don’t want to be on this ride.” Over at spa central, the Rookies are being wined and dined like royalty while the Veterans are up early prepping for that night’s dinner services, where they must endure the sight of Trevor fumbling his way through the simple act of poaching batches of eggs.

What’s for dinner? Pork, scallops, beef, flatbread, New York Strip, carbonara and a gourmet clam chowder prepared tableside by Gizzy for the Red Team and Bret for the Blue Team. Oh, look! There are celebrity diners in the form of funny ladies Cheryl Hines and Rachel Harris plus Morgan Spurlock of “Super Size Me” doc fame. Mia doesn’t want the Rookie’s winning glow to dim so she gets bossy in the kitchen and butts up against Scotley. Sous chef Christina tells him to watch his mouth. Scallops have been a weakness before but Ariel vows to get them right. Ramsay praises the Blue Team’s rhythm while the Reds aren’t quite in the groove yet. Bret is too chatty with tableside clientele and then somehow a forgotten cremated pork chop mysteriously emerges from the Rookie’s fish oven.

Ramsay is finding faults all over the place. Hines asks her friend, “Why is he so cute when he yells?” Says Harris, “He’s British.” We don’t disagree. The Red Team are still not quite in sync and Chef G suddenly wants to play guess the temperature with chunks of meat. Mia says medium. Motto says overdone. It certainly is, once Ramsay starts throwing it around. As for the Blues, Kevin’s timing is off and Trevor won’t own up to his baaaa-dly done lamb.

“YOU GUYS WERE IN OBLIVION THIS EVENING!”

Chef Ramsay reams out both teams, saying they are going backwards. The Blues are named the losers … and so are the Reds. The Veterans and Rookies have to come back with two names up for elimination. The Blues narrow down their problem to the handling of the meat station – putting Kevin and Trevor in the hot seat. Gizzy speaks up for the Reds as she blames Chris for his fish woes and Mia goes after Scotley. Kanae also brings up Gizzy’s tableside mistake.

NEXT TIME ON HELL-OWEEN KITCHEN
Expect a whole new house of culinary horrors with Mia fixated on slaughtering Beef Wellingtons while Kevin cackles as he tortures Chris in the kitchen.