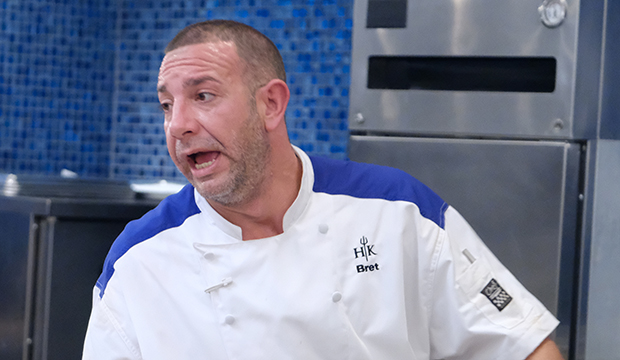 Last week’s Season 18 premiere of “Hell’s Kitchen” was a fanciful amuse bouche compared to this week’s heavy-duty challenges faced by the 16 chefs participating in the show’s first-ever Rookies vs. Veterans showdown.

No one was sent packing as newbie Mia Castro came out on top and scored a fancy dinner for the red-team Rookies after she and blue-team returning player Kevin Cottle both scored 5 out of 5 on a signature dish challenge. The bottom feeders were mouthy vet Jen Gavin and name-dropper newbie Scott Popovic, whose less-than-stellar creations both earned a  low score of 2.

This week’s episode starts rather oddly with bagpipers and funereal floral arrangements. Chef Gordon Ramsay promises a farewell is in store and acts if Jocky, the blue team’s Scottish sous chef, might be taking his leave. Instead, what will depart is the dish he is holding in his hands.  But before we learn what it is, Ramsay naughtily lifts the kilt of one the bagpipers. Cheeky boy!

Instead, it is the Hell’s Kitchen famous lobster risotto that will get deep-six’d off of the menu. Tribute is paid with a highlight reel of Chef G blasting various sub-par risottos over the years, such as this less-than-savory description, as he bellows at a cowering contestant:   “How did you manage to make a risotto move like a bowl of vomit that’s been dipped in oil.

TIME TO GET COOKING

Rather than wallow in that rancid description, Ramsay serves a rather tasty distraction – a game-changing twist dubbed a punishment pass that will be presented to the chef who concocts a new risotto recipe for the “Hell’s Kitchen” menu. The winner will get a free pass, meaning if they find themselves on the losing team they can avoid the punishment and join the victorious players.

With that incentive, the chefs race to grab various proteins for their creamy rice concoctions. The Rookie team’s snark queen Gizzy Barton, however, decides to go against the grain and do an all-vegetarian version.  Veteran Bret Hauser gets a bad case of braggadociosness, proclaiming he makes asparagus and shrimp risotto five times a week and can do it in his sleep. Mia, meanwhile, states the obvious: “If we are in Hell’s Kitchen and we can’t make risotto, we shouldn’t (bleeping) be here.”

The Rookie’s sous chef Christina looks askance at Chris Mendonca’s choice of pork belly, given they only have 45 minutes to cook. ”We make this at Gordon’s restaurant and we slow-cook it for 36 hours.” Just then, Ramsay calls “Five minutes.” Will he be doomed by under-done bellies?

Rookie Kanae Houston is hungry for that pass. “Just in case if we have to eat cow testicles or something.” Ramsay steps back and allows Christina and Jocky to narrow down the field of 16 dishes to just four from each team. The eight servings of risotto that make the cut:

Surprise! Chris’ pork did not go belly-up as he pairs it with a runny poached egg. Ramsay notes, “It doesn’t look like a risotto but the flavor it punches is great.”

Chef G then relishes T Gregorie‘s scallop risotto with leeks and tomato. She explains that, “It is finished with a little bit of green tomato relish.” Ramsay initially questions the choice but eats his words: “The green tomatoes really give it that different dimension. The scallops are cooked  beautifully.” She knocks out Chris.

Gizzy’s risky vegetarian variation of risotto is next.  Ramsay questions that the dish “doesn’t have backup from a great protein. It doesn’t have beef or pork. A vegetarian dish in Hell’s Kitchen? There’s no way.” But before he can say what he really thinks, it is time for a commercial break.

We’re back, so will he love it or leave it? “It’s delicious. It lifts the palate up.” Sounds like amore to me.

Veteran Roe DiLeo’s carrot turmeric ginger risotto is up next. But her rice packs too much crunch. However, Rookie Mia’s sweet tea and basil risotto with crunchy pancetta hits the spot as it gives Ramsay a case of the munchies.  Does it beat Gizzy’s no-meat treat? It definitely does.

Veteran Ariel Fox serves her pecorino and wild mushroom risotto, and receives a dismissive “Take your dish back.” Meanwhile, Scott delivers risotto with blistered tomatoes, Parmesan, mascarpone and bacon risotto with a little bit of simple syrup and butter. And he does a happy dance when Gordo says, “It’s delicious. It lifts the palate up.” While Scott believes his is better than Mia’s, Ramsay doesn’t regret to tell him he is wrong.

That leaves braggy Bret, whose chest-thumping isn’t winning him any favors with his competitors nor with Jocky, who calls him out on his pretentious description of his risotto as having a brodo – which is Italian for broth. But, ultimately, Chef Ramsay is all that matters and he declares Bret’s grilled shrimp with charred asparagus tips and seafood and tomato brodo – um, broth — with Parmesan to be the winner. His will be the recipe that goes on the menu, along with snagging that punishment pass.

Bret goes to the lounge area after crying with joy, and notes, “It’s an individual win but it’s a W for the team.” Some of the Rookie chefs like Chris and Scott rather mock him for saying things like “I’ve got an Italian flag on my chest!” than applaud his victory.

But the Rookies will have to deal with their own bad habits when they fail to snap to attention when they are beckoned to the red kitchen.  The all-stars know that dawdling just doesn’t cut it when it comes to HK protocol and they duly come when called. Christina goes ballistic on newbies, yelling, “Are you kidding me? Are you on vacation?”

They are given a menu to be served that night at the restaurant: Char-grilled octopus, beef tartare, carbonara, two Wellington dishes, beef and lobster.  She says she and Jocky will only be plating the Wellington. There is also halibut, lamb chops and salmon.

ROOKIE MISTAKES BY ONE AND ALL

Veteran Trevor McGrath immediately gets on Jocky’s bad side for mishandling the Wellington dough. At least he pays attention and doesn’t make excuses. Soon the diners start arriving. The new Hell’s Kitchen has been booked months in advance, we are told, so the pressure is on. Bret’s tomato risotto with shrimp and asparagus is on the menu and Chef Ramsay has also added a special shrimp and tomato appetizer that will be served table-side by Rookie Scotley Innis and Veteran Roe.

Ramsay starts calling out orders double time and T asserts herself as the leader. Matters start going downhill when Ramsay tastes the appetizer and calls over the chefs to try it, too. “It’s a TOMAHTO risotto. What is the first taste in there? CHEESE! Less cheese please!”

Bret is sweating. Ramsay tells him, “This is your dish. You need to be over it. Help T get to speed.” But little “h” hell breaks out when Scott confuses the two shrimp dishes – the risotto and the table-side appetizer. T, meanwhile, is called out for rubbery and milky scallops. He says to get it together. Apparently, they do because a diner declares the scallops are to die for.

Meanwhile, Rookie Jose DeJesus is handling the halibut and is falling behind. He says he wants to show Chef Ramsay that he is a force to be reckoned with, but not when the halibut is raw inside. He is told, “Jose, you need to grow some quickly.” The Rookies’ first-ever dinner service is close to a disaster but the halibut is eventually cooked right.

The Veterans in the blue kitchen are making rookie mistakes themselves. Bret mistakenly slices the lamb, much to Ramsay’s chagrin.  Then Heather Williams spies Jen overcooking the pork on the grill. Kevin goes over to check it and Jen resents his interference. Ramsay calls her out for forgetting the sauce for the dish.

Dinner service starts to sink to a new low when Ramsay makes the Rookies sing a jingle, “Two halibut, two pork, one lamb, one beef – together.” After several choruses., the chef has had enough. “I’ve never known such a frightening service. … think of two individuals you could do without.” He then issues a bleep storm before telling them to get out.

Needless to say, the Blue Team takes the win.

Three Rookies are possibly on the chopping block – Chris, Jose and especially Scott, who should know better since as we all know he owns a restaurant. The three chefs defend themselves. Jose claims he is a great leader and ambitious, ready to give 120 percent. Scott knows beef extremely well. Ramsay tells him, “Great. You should be a (bleeping) butcher.” Chris has the most unusual excuse: He got mixed up because he suffered a concussion after accident recently and is unfocused.

We see an image of a knife being sharpened – that can only mean someone is about to be cut. Ramsay makes a decision: “Jose and Chris, get back in line.”

Yes, Rookie Scott is the first casualty of the season. It seemed as if Ramsay had it in for him since the beginning after he so casually mentioned working with such master chefs as Eric Ripert and Thomas Keller. Gordo can’t help but deliver one last burn as he strips Scott of his coat: “Even though Scott has worked with some of the biggest named chefs in the world, I know I won’t remember him by tomorrow.”

COMING UP NEXT WEEK

Mia cries in this episode that, as we are told, everyone will be talking about.  Meanwhile, Jen gives lots of lip to Ramsay, and he drops a bunch of dishes in anger.