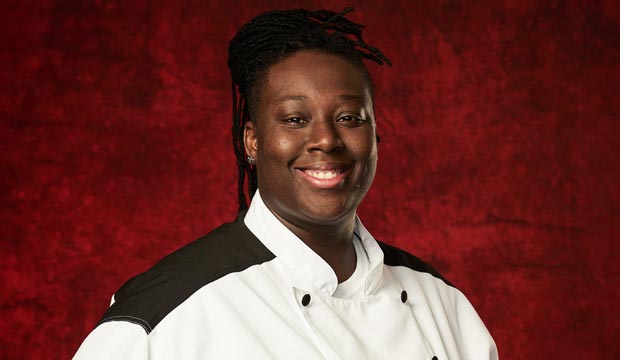 Previously on Season 18 of “Hell’s Kitchen,” a giant fish fell from the ceiling — just for the halibut – and the newly formed all-female Blue Team won the seafood challenge involving seven dishes using different techniques. But then came dinner service and Gizzy Barton let her nerves get the better of her as she messed up her lamb chops while teammate Mia Castro was compelled to commit a no-no by slicing up wellingtons. But, unexpectedly, it was Season 6 runner-up Keven Cottle who Chef Gordon Ramsay sent packing after he turned his salmon filets into rubber. How did Friday’s episode, titled “Hot Potato,” play out? Scroll down for our minute-by-minute “Hells Kitchen” recap of Season 18, Episode 6.

9:03 p.m. Bret Hauser is shocked, shocked that Kevin is gone – and also glad, because less competition. Trevor McGrath states the obvious: “We got to beat these girls.” He then predicts that “there are two big personalities in there who are going to butt heads very soon.” As much as it pains me to say this, judging by the teaser from last week, he is right. Cut to Season 14 runner-up T Gregoire bossily reading the riot act to the Blue rookies: “You guys have to stop second-guessing yourselves.  There’s nothing I can do to teach you meat temperatures in 5 minutes.”

9:05 p.m. Kanae Houston sticks her feet in the hot tub near fellow rookie Chris Mendonca, who asks the rhetorical question, “Is it possible to have a good service?” He says he is starting to doubt things, especially after he was odd man out last week when no one ordered his tableside service. It feels as if a reckoning  might be afoot.

9:07 p.m. Trevor is getting cabin fever after not sharing in any rewards that gets him outside the Hell’s Kitchen premises. At least he is about to meet a household legend, according to Chef Ramsay. Maitre’d Marino Monferrato comes out with domed serving tray – and, no, he is not the legend. Instead, it is a replica of Mr. Potato Head.  Ah, that is why episode 6 is called “Hot Potato.”

9:10 p.m.  Guess what the challenge is? Yes, a dish where a potato is the star. Various types of spuds are trotted out. Each chef has to scramble for Potato Head body parts that feature the names of  ingredients after they are tossed on the floor. Suddenly, a downpour of plastic pieces falls from the ceiling.  The chefs must place whatever body parts they choose on their own Mr. or Mrs. Potato Head.

9:12 p.m. Chris is making a lobster version of shepherd’s pie. Kanae is doing some kind of crumble. T makes a meat loaf, confident that it is her challenge to win. Clock ticks down and the women learn that since they have an extra chef on their team, whatever is deemed the weakest dish must be dropped. They withdraw Kanae’s because it is thought by T to be “visually unappealing and clunky.”

9:15 p.m. Chef Richard Blaise is guest-judging. Jose DeJesus’ sweet potato gratin is trying too hard. It earns  a score of 4.  T is next, and Blaise finds flaws a-plenty, from granular puree to not-quite-right peas. Ramsay dumps on her potatoes. She gets a total of 3 points. Trevor steps up his game with a potato fritter with shrimp. It’s a 6. Heather Williams also gets a 6. Ramsay raves that Chris’ lobster pie is the best thing he has cooked so far on the show. He gets a perfect total of 10. Ariel Contreras-Fox combines Yukon and sweet potatoes for a

9:17 p.m. The men have a 2 point lead. Motto underwhelms with a  total of 2. It’s Mia to the rescue for the ladies with her Peruvian potato dish worthy of being on a menu right now, according to Blaise. She gets a 10. Scotley Innis gets an 8 and Gizzy gets a lowly 3. Kanae is ticked her dish was pushed aside. It is all down to Bret, whose rustic gnocchi gets a perfect 10, and Roe DiLeo’s steak and potatoes gratin collects a 9.

9:20 p.m. It’s a tie, 40-40, and it comes down to comparing the best dishes from each team. Mia, Chris and Brad all scored 10. Chris is declared the champion!  And there is good news for Kanae, as Blaise tastes her scramble with crispy prosciutto and suggests that “it might have served your team to have this dish on the roster.” It gets an 8 out of 10, which would have won it for the Blue Team. Of course, a bitter T won’t own up to her mistake in judgment.

SEE‘Hell’s Kitchen’ 18 episode 5 recap: The men fumble, while Chef Ramsay says everyone needs to take their passion and make it happen in the kitchen

9:28 p.m. Trevor finally gets to go outdoors. The guys will visit a wildlife sanctuary, Animal Tracks. The ladies will be stuck inside performing a task that has loads of a-peel – potato peels, that is – since the dinner service will be steak night. Kanae, ticked that her dish was left out, thinks low scorers T and Gizzy should peel the most ”bleeping” potatoes and  hopes they “shave off a fingertip while they are at it.”

9: 31 p.m. The guys return and head to the kitchen. Chris continues to question himself despite his recent success. He takes sous chef Christina aside and tells her he wants to bow out.  He had an accident a while back, he explains, which can sometimes mess with his emotions. She says she appreciates his honesty and quickly summons Gordon so they can talk.

9:40 p.m. The Boston rookie reveals  that he is hearing “demons” and “voices in his head.”  A concerned Ramsay insists he needs to get help quickly and Chris drops out. The chefs on both teams are emotionally affected by the loss, as Ramsay assures  Chris is getting help and they have to move on.

9:44 p.m. The five male chefs left  shout out that they are “doing it for Chris” tonight and away they go. The ladies hope to capitalize on the fact that they have two extra cooks to share the burden. Ariel adds some levity to the situation as she describes the “gorilla faces” that Mia makes when in the heat of battle. She nails the risotto, however. This gal isn’t just monkeying around.

9:47 p.m. Jose also prepares his risotto perfectly. All is going well for him and Mia, who are both in charge of appetizers. But let’s see if the entrees – which have been more miss than hit this season – go quite as well. Jocky tells Kanae that her branzino is not right and Ramsay adds to the pressure by noting that six hungry firefighters are eagerly waiting on their food. But it is an underdone fish fail in the extreme but her do-over comes out better.

SEE93% of ‘Hell’s Kitchen’ fans are thrilled Jen Gavin flamed out early: It was her time to go [POLL RESULTS]

9:49 p.m.  Motto, obsessed with sides, forgets the entrée orders he is supposed to shout out to the other chefs. But Ramsay gets him over the hurdle.

9:51 p.m. T says it’s an honor to man the meat station alongside Heather, saying that together “we are a power couple.”  But Ramsay slices their filets and soon arrives the “bleep.” He calls over T and Heather, and tells them the steaks need more cooking. Heather says, “We need to step it up.” Duh.

9:52 p.m.  “Heather and T!  Urgently!” Ramsay now dings their steaks on being “way over.” T blames Heather, who is supposed to pull the meat out of the oven when it is ready. Heather brings over more filets and the women are taken to task again by Ramsay. T pushes aside Heather, shuts down and cooks the steak herself.

9:53 p.m. Ramsay sinks to the floor as if he is dizzy. The poorly done meat has “brought him to his knees.” He finally recovers and calls for a gathering of the Blue Team. He then asks Jocky to fill in on the meat station while he takes the women to task for not having cohesion and team work. He is at the end of his rope, telling them to go back upstairs and pick two nominees for elimination.

9:54 p.m. The men, however, do themselves proud. Trevor, who has been in charge of the meat, is told by Ramsay that his cooking “has been on point.”

9:55 p.m. Heather and T are in blame-game city and may never recover.

9:57 p.m. Of course, the Blue gals pick T for her lack of communication. The second nominee is, naturally, Heather. They step forward. Ramsay can’t believe that runner-ups from two seasons are standing before him in disgrace. And the person leaving “Hell’s Kitchen” is … T.  He suggests to the ladies that they get rid of the “personal crap” and focus on the job at hand. Next week: The chefs are told to let their imaginations go wild as tension builds between Scotley and Trevor, with Bret in the middle.