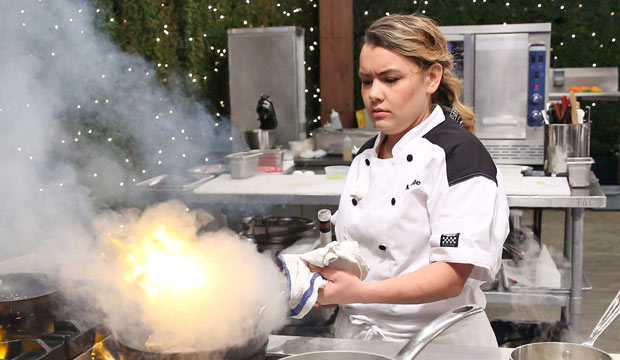 Heading into the “Hell’s Kitchen All Stars” season finale, Gordon Ramsay had a tough decision to make between which of his Final 3 chefs — Nick Peters Bond, Benjamin Knack and Michelle Tribble — would win. In the end Ramsay decided to choose not only who did the best in the two-hour finale, but also who excelled throughout the entire season. After an agonizing wait he finally named Michelle as the winner of Season 17, honoring her with the Executive Chef position at the Caesars Palace Hell’s Kitchen in Las Vegas and a salary of $250,000.

“Having the youngest of all-stars step up and win this competition is a testament to Michelle’s talent,” Ramsay explained about why he picked the 24-year-old Dallas, Texas resident as the 17th winner of his popular reality TV show. “At a very young age, she has already proven she is driven, creative and commanding. She will be a great asset to Hell’s Kitchen in Las Vegas.”

SEE ‘Hell’s Kitchen All Stars’ finale: Did the right chef win or was one of the other finalists robbed? [POLL]

After previously coming in third place back in Season 14, Michelle returned this season with a lot to prove, as she was the youngest all-star in the competition. She now joins the list of former “Hell’s Kitchen” winners that includes past fan-favorites like Michael Wray (Season 1), Dave Levey (Season 6), Christina Wilson (Season 10), Meghan Gill (Season 14) and Kimberly-Ann “Ryan” Ryan (Season 16). See the complete list down in our photo gallery.

Were you happy with how the “Hell’s Kitchen” finale went down, or were you hoping that either Nick or Benjamin would pull off a victory? Click here to vote in our poll and then sound off in the comments section. Also be sure to read our live blog of the two-hour season finale.

Kevin Argueta ('Hell's Kitchen') on being thrown out of kitchen by Gordon Ramsay after lobster debacle: '…

'Hell's Kitchen' season 20 episode 7 recap: Who was eliminated in 'If You Can't Stand the Heat'…

Matt Gagnon ('MasterChef') eliminated after overcooking filet mignon: 'I have a lot to learn'…

'Hell's Kitchen' season 20 episode 6 recap: Who was eliminated in 'A Ramsay Birthday in Hell'? [UPDATING…