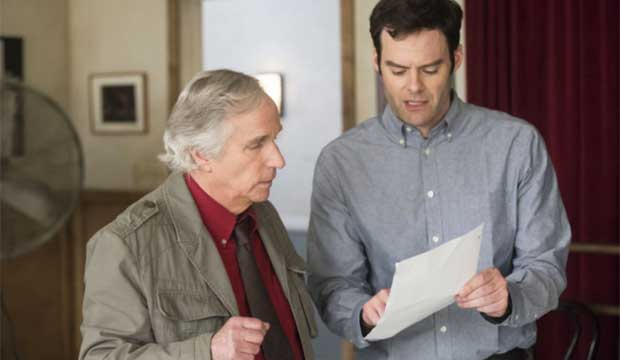 Henry Winkler has lost all five of his Emmy bids to date but that losing streak could finally be over as he’s earning rave reviews for his scene-stealing role on the new comedy “Barry.” Bill Hader plays Barry Berkman, an ex-marine turned hitman who, desperate for a break following his most recent job, is sent off to Los Angeles. There he unexpectedly finds comfort and acceptance among the local theatre community. He takes an acting class taught by Gene Cousineau (Winkler), who initially thinks Barry is a dreadful actor but is later won over by his all-too-convincing declaration that he is a killer.

As Maureen Ryan of Variety observed, “Winkler, among others, is good at peeling back the pompous and self-absorbed layers of his character to find the truthful artist inside — and, whatever his flaws, he gets Barry and others to do the same.” Also singing the actor’s praises was Matthew Gilbert of The Boston Globe: “I laughed out loud a number of times while watching the eight episodes of the first season, usually thanks to Henry Winkler as failed-actor acting coach Gene Cousineau.”

Tim Goodman of The Hollywood Reporter also championed Winkler: “Despite some early doses of violence to illustrate that Hader’s Barry is, in fact, a damned good shot and cold-blooded as well, the series leans into the absurd, with Winkler’s beautifully spot-on acting teacher (and failed actor) Gene Cousineau providing plenty of moments as he exasperatedly tries to coach a stiff, almost narcotically unexpressive Barry to embrace improvisation.”

Winkler will face formidable competition for Best Comedy Supporting Actor from the likes of past champs Sean Hayes (“Will and Grace”) and Louie Anderson (“Baskets”). But don’t underestimate his chances, given his years in the industry and the prevailing sentiment that he’s long overdue for Emmy glory.

The actor earned the first of his three consecutive Emmy nominations for his iconic role as Arthur ‘The Fonz’ Fonzarelli on the beloved ABC sitcom “Happy Days” back in 1976. He lost that first race to Oscar winner Jack Albertson, who starred in “Chico and the Man” and then the following two years to Carroll O’Connor (“All in the Family”).

Since then, he has contended only one other time for acting with a Drama Guest Actor bid in 2000 for “The Practice.” Another guest performer on that legal drama, James Whitmore, won. Add in his loss for producing the 1977 informational program “Who Are the DeBolts (And Where Did They Get 19 Kids)?” and Winkler is 0 for 5 at the Emmys.

Do you think Winkler will finally win? Be sure to make your Emmy predictions today so that Hollywood insiders can see how their TV shows and performers are faring in our odds. You can keep changing your predictions as often as you like until just before nominees are announced on July 12. And join in the fun debate over the 2018 Emmy taking place right now with Hollywood insiders in our television forums. Read more Gold Derby entertainment news.