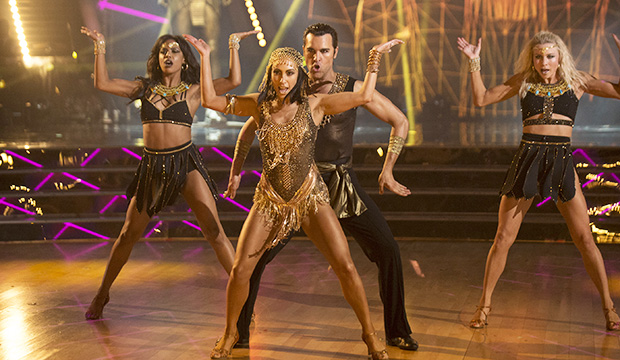 Some “Dancing with the Stars” Halloween routines posted some scary high YouTube numbers this week, but one person who’s been logging a ton of views fell off drastically. It’s no trick, but it might be a treat for some people.

Milo Manheim and Witney Carson
Contemporary: 395K
Milo rebounded from a good but not great quickstep to deliver a delightfully eerie and perfect-scoring contemporary. This massive view count is the highest of any routine, as of press time, this season. If enough of these people also vote, then this kid will win this whole thing.

Alexis Ren and Alan Bersten
Jazz: 240K
Despite the Renten showmance reaching spectacularly shameless heights, Alexis’ plays total fell short of hers last week at this time (245K). A sign that people aren’t into this “relationship”?

Juan Pablo Di Pace and Cheryl Burke
Jive: 97K
The “Fuller House” star garnered his second 30 of the season, but people were far less interested in (re)watching this routine again unlike the 186K that checked out his 30-scoring samba.

Evanna Lynch and Keo Motsepe
Tango: 84K
The judges finally gave Evanna the overdue love and scores she deserved, but it hasn’t translated into a ton more views.

DeMarcus Ware and Lindsay Arnold
Salsa: 82K
DeMarcus is still riding the middle with his play counts, and we hate to say it, but he hasn’t really improved since the first two weeks. The salsa may just not be his dance, but the longer we wait for a breakthrough performance from him, the more he runs the risk of getting cut.

Joe “Grocery Store Joe” Amabile and Jenna Johnson
Argentine tango: 79K
No, your eyes are not deceiving you. Grocery Store Joe didn’t break six figures for the first time this season even though he had his best performance and best score (he broke 20 points!) this week. Does this mean what we think it means? Probably not, but it’s still telling that his YouTube views have taken a major downturn the past two weeks.

Mary Lou Retton and Sasha Farber
Tango: 49K
The Olympic champ’s elimination wasn’t that surprising since she’d been getting lost in the pack. Once again, she is second to last here, but sadly, for the last time.

John Schneider and Emma Slater
Paso doble: 48K
Schneider has the fewest views for the fourth straight week, but he’s still hanging on in the show and he deserves way better scores than he got from the judges this week. #Justice4John