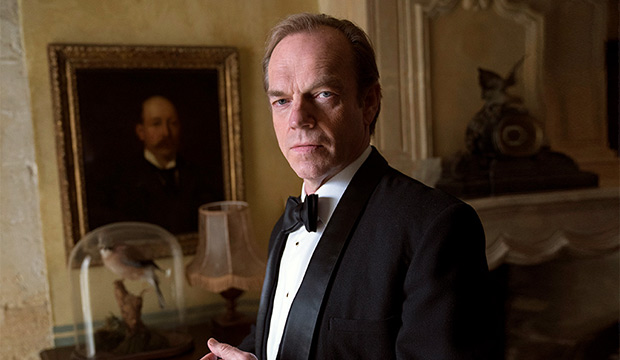 The first episode of “Patrick Melrose” was a tour de force for Benedict Cumberbatch, but the second episode belonged to Hugo Weaving. Titled “Never Mind,” the episode is sure to be Weaving’s Emmy submission for academy judging if he is nominated for Best Movie/Limited Supporting Actor. David Melrose, father to Cumberbatch’s Patrick, is a scenery-chewing role for the accomplished actor, who has never been nominated for an Emmy or Oscar in three decades on screen, including such iconic roles as Agent Smith in “The Matrix,” V in “V for Vendetta” and Elrond in both “The Lord of the Rings” and “The Hobbit.” Weaving has however reached national-treasure status in his homeland, winning four Australian Academy of Cinema and Television Arts Awards this decade.

David’s death is the inciting incident of the five-hour Showtime miniseries adapted from semi-autobiographical novels by Edward St. Aubyn, so David appears primarily in a coffin in the premiere, but he takes center stage with haughty monologues in this weekend’s installment, which is consumed by an extended flashback to 15 years prior, with Patrick played by child actor Sebastian Maltz instead of Cumberbatch. Domineering to his upper-class peers, David is abusive in every sense to his son.

It is a timely role in the age of the #MeToo movement, albeit with David being an aggressor instead of a survivor. Such an unsympathetic part might seem like an unlikely turn to rally support, but the Emmys went so far as to award another portrayal of a rapist in this category just last year. Alexander Skarsgård not only won the Emmy for HBO’s “Big Little Lies,” but also swept up wins from the Golden Globes, Critics’ Choice and the Screen Actors Guild.

SEEBenedict Cumberbatch (‘Patrick Melrose’) could sneak off with the Emmy again

Advance reviews roundly praised Weaving’s performance, as “brilliantly menacing” (Collider), “fabulously awful” (Variety), “genuinely terrifying” (The A.V. Club), “outstanding” (USA Today) and “sensational” (The Plain Dealer). Salon’s Melanie McFarland wrote that “Weaving’s ability to weaponize fear through the faintest smile comes through again and again” and the Boston Globe’s Matthew Gilbert contended, “Weaving accomplishes everything a villain should. He delivers a chilling turn, as David rationalizes the torture of his son by calling it a character-building exercise.”

Even critics who did not take as kindly to “Patrick Melrose” commended Weaving. A C+ review in Entertainment Weekly noted that a “terrifying Hugo Weaving uses his laser-precision menace to infuse even the smallest moments with dread” and a C-graded review in The Gazette singled out Weaving as the standout of the cast, calling him “captivating and horrifying.”

PREDICTthe Emmy nominees and winners now; change them until July 12
MAKE YOUR PREDICTION: Who'll win Best Movie/Mini Supporting Actor?
To save your prediction, you must log in to Gold Derby. Click here to sign in with existing account -- or create a new one.