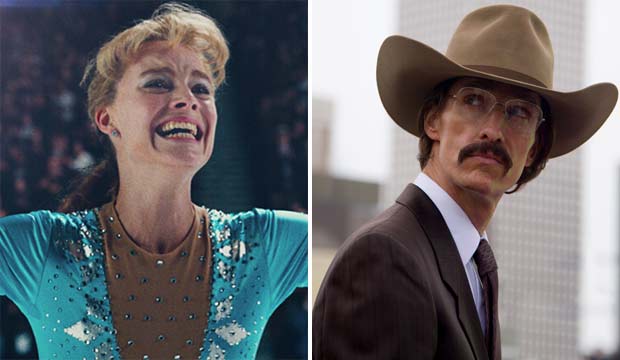 “I, Tonya” is a biographical film set in the late 1980s and early 1990s that at first seemed primarily like an awards contender for its actors: Margot Robbie for her leading role as figure skater Tonya Harding and Allison Janney as her abusive mom LaVona. But as the season has progressed the film has been looking more and more like a potential Oscar nominee for Best Picture. It just got a major boost at the Producers Guild Awards where it was surprisingly included among the 11 contenders for Best Picture. Now it looks like it might be following the same trajectory as “Dallas Buyers Club” (2013) as it advanced towards the Oscars.

“Dallas Buyers Club” was also a biographical film set in the late 1980s and early 1990s, and it too seemed mostly like an awards vehicle for its actors: Matthew McConaughey for his lead role as AIDS activist Ron Woodroof and Jared Leto as his transgender friend and ally Rayon. But it kept over-performing throughout the awards season, earning a Best Picture nomination at the Critics’ Choice Awards, a Screen Actors Guild Award nomination for its ensemble cast, a Writers Guild nomination for its original script, and a Producers Guild bid for Best Picture.

“I, Tonya” hasn’t gotten the exact same plaudits along the way. It didn’t earn a Critics’ Choice bid for Best Picture or a SAG Award nomination for its ensemble, but it did pick up a Best Film Comedy/Musical nom at the Golden Globes and it was also cited for its screenplay by the Writers Guild. Now it’s a nominee at the PGA Awards just like “Dallas Buyers Club” was, and looking at the awards landscape going forward it could end up with almost the exact same six Oscar nominations that “Dallas” got: Best Picture, Best Original Screenplay, Best Film Editing, Best Makeup and Hairstyling, plus lead and supporting acting nominations.

“Dallas Buyers” ended up winning three of those Oscar nominations: for McConaughey, Leto, and its makeup/hairstyling. Could “I, Tonya” do just as well this year?