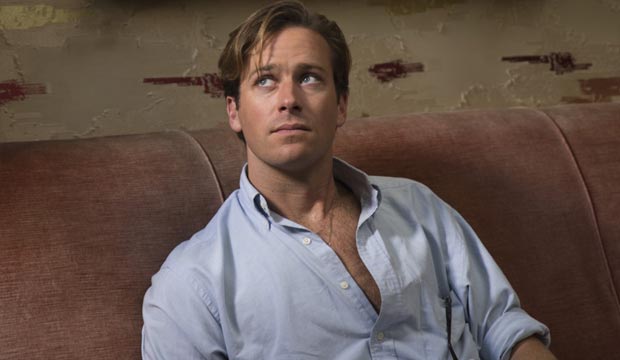 Armie Hammer earned Golden Globe and Critics’ choice nominations for his performance in “Call Me by Your Name” as a grad student who falls in love with his professor’s son (Timothee Chalamet), but then Hammer was overlooked by the SAG Awards, BAFTAs and Oscars. However, there’s still one event where Hammer could be avenged: the Independent Spirit Awards, which will be handed out the night before the Oscars. He’s a dark horse contender with 10/1 odds according to our latest predictions.

As of this writing Sam Rockwell (“Three Billboards Outside Ebbing, Missouri”) has the lead for Best Supporting Actor with 2/11 odds after dominating the awards season with victories at the Globes, Critics’ Choice Awards, SAG Awards and BAFTAs. He’s the favorite for the Oscar as well, but perhaps that will actually help Hammer at the Spirit Awards. “Call Me” is the most nominated film at these awards with six bids, and if Spirit voters think Rockwell will be taken care of by the motion picture academy they might want to take this opportunity to rally behind Hammer.

The Spirit Awards often pick the Oscar front-runner where available in any given category, as they did in this race by awarding Christopher Plummer (“Beginners,” 2011), Jared Leto (“Dallas Buyers Club,” 2013) and J.K. Simmons (“Whiplash,” 2014) in recent years. That’s good news for Rockwell, but last year Lucas Hedges (“Manchester by the Sea”) was the only Oscar nominee in this category and Spirit voters opted for Ben Foster (“Hell or High Water”) instead, so the door is open for an upset.

As of this writing more than 1,600 Gold Derby users have entered their Spirit Awards picks in our predictions center, including our Top 24 Users who got the highest scores predicting last year’s winners. Three of those top users are forecasting a victory for Hammer. He also has support from three of our All-Star Top 24, who got the highest scores when you combine the last two years’ predictions. Can he pull it off?

MAKE YOUR PREDICTION: Who will win Best Supporting Actor?
To save your prediction, you must log in to Gold Derby. Click here to sign in with existing account -- or create a new one.
PREDICTthe Independent Spirit Awards now; change them until March 3

Be sure to make your Indie Spirit predictions so that Hollywood studio executives and top name stars can see how their films are faring in our odds. Don’t be afraid to jump in now since you can keep changing your predictions until just before winners are announced on March 3. And join in the fierce debate over the 2018 Spirit Awards taking place right now with Hollywood insiders in our film forums. Read more Gold Derby entertainment news.