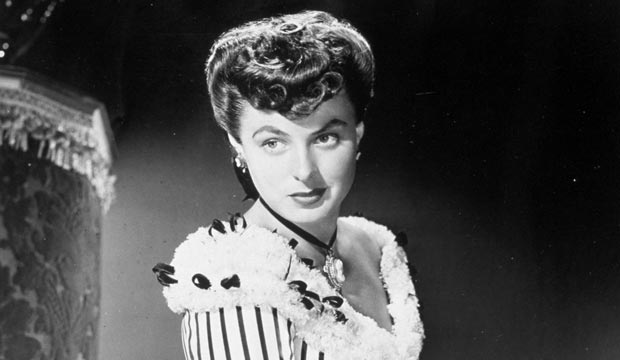 August 29 marks the 103rd anniversary of the birth of legendary film star Ingrid Bergman. Born in Stockholm, she was working in Swedish and German films during the 1930s, when one of her Swedish films, 1936’s “Intermezzo,” caught the eye of powerful Hollywood producer David O. Selznick. He announced that he planned to remake “Intermezzo” in English and would bring Bergman to Hollywood to star. The only problem was that Bergman didn’t speak English, but she turned out to be a fast learner, and the combination of her work ethic and her radiant beauty put Bergman well on her way to becoming an authentic movie star.

Not only did Bergman become an audience favorite, but her acting skills earned her the respect of moviegoers and Hollywood producers alike. In the course of her four-decade film career, Bergman was nominated for seven Academy Awards, winning three for “Gaslight,” “Anastasia” and “Murder on the Orient Express”. She is one of only six actors in history ever to manage that feat of three or more acting victories. In addition, she was also nominated for seven Golden Globe Awards for her film work, also winning three. Other classics in her career have included the legendary “Casablanca,” “Notorious” and “Spellbound.”

On her special day, let’s take a photo gallery tour and rank her 15 greatest films from worst to best.

15. SARATOGA TRUNK (1945)
Based on the Edna Ferber novel, “Saratoga Trunk” starred Bergman as Clio, the illegitimate daughter of an aristocratic Creole father and a light-skinned Creole mother who, after living in Paris, return to New Orleans and team up with a Texas gambler (Gary Cooper) to seek justice for her mistreatment at the hands of her father’s family. It was Warner Bros.’ biggest box-office hit in 1945.

14. INTERMEZZO: A LOVE STORY (1939)
With “Gone With the Wind” co-star Leslie Howard as her leading man, Bergman simply lit up the screen as Anna Hoffman, who is the piano teacher to the daughter of famed virtuoso violinist Holger Brandt (Howard). Upon hearing Anna play, Holger insists that she be his accompanist on his upcoming concert tour. While traveling together in such close quarters, one thing leads to another, and Anna begins a torrid affair with Holger.

13. STROMBOLI (1950)
Although critical reaction to Roberto Rossellini‘s film was negative at the time, “Stromboli” has since grown in reputation to be considered a classic of Italian neo-realism. And, from a film history perspective, it’s the film where Bergman and Rossellini began their scandalous love affair which resulted in a 7-year marriage.  Bergman plays an Lithuanian emigre who marries an Italian fisherman (Mario Vitale) who brings her back to his volcanic island of Stromboli where she must fight to earn the respect of the disapproving island dwellers.

12. THE BELLS OF ST. MARY’S (1945)
Every Christmas, my mom and dad gathered the family around to watch the umpteenth rerun of Leo McCarey‘s film. Catholicism aside, this is an emotionally potent film, thanks in large part to Bing Crosby (reprising his earlier Oscar-winning role of Fr. Chuck O’Malley) and Bergman, whose hard-nosed Sister Mary Benedict goes head-to-head with the good padre.

11. FOR WHOM THE BELL TOLLS (1943)
Bergman earned her first Best Actress Oscar nomination for her performance as Maria, a young guerrilla fighter who meets Robert Jordan (Gary Cooper), an American volunteer in Spain fighting the Franco forces during the Spanish Civil War. Readers around the world loved this story by Ernest Hemingway, who is said to have personally selected Bergman and Cooper for their roles.

10. CACTUS FLOWER (1969)
One of Bergman’s most commercial films, Gene Saks‘ film is a rare comedy for the actress in which she plays Miss Dickinson, the loyal nurse to womanizing dentist Dr. Julian Winston (Walter Matthau). His girlfriend Toni Simmons (Goldie Hawn, in her Oscar-winning performance) has attempted suicide because a lack of a marriage proposal from Dr. Winston, who claims he’s married.

9. INDISCREET (1958)
Bergman reunited with her “Notorious” co-star Cary Grant in this Stanley Donen romance, earning her fifth Golden Globe nomination as Anna, an actress who has abandoned all hope of finding love when she meets Philip, an economist who claims that he can’t commit to her because he’s married. He’s actually single, and when Anna finds out, she sets out to get revenge.

8. JOAN OF ARC (1948)
By 1948, she had amassed enough clout in the industry to realize her dream projects, but making “Joan of Arc” was still a tough road for Bergman, and the film was finally made not by a major studio but by an independent company. While the reviews of the film at the time were largely positive, the reviews that Bergman received for her performance as the Maid of Orleans were glowing, resulting in her fourth Oscar nomination as Best Actress.

7. MURDER ON THE ORIENT EXPRESS (1974)
Sidney Lumet‘s film version of Agatha Christie‘s classic whodunnit gathered a galaxy of stars playing passengers on board a train headed for England when a murder occurs, and every one of the first class passengers are suspects. Lumet offered Bergman the flashy role of suspect Princess Dragomiroff, but she asked to play the much smaller role of missionary Greta Ohlsson. Bergman clearly knew what the meaty part was, and, as a result, Bergman won her third Academy Award and her first in the supporting category.

6. SPELLBOUND (1945)
“Spellbound” was Bergman’s second film under the direction of Alfred Hitchcock and one that was much more psychologically intense than “Notorious.” Set at a mental hospital, Dr. Constance Petersen (Bergman), a psychoanalyst thought by many on the staff to be an ice princess, is surprised when the hospital’s director (Leo G. Carroll) is forced into retirement and replaced by the much younger Dr. Anthony Edwardes (Gregory Peck).

5. AUTUMN SONATA (1978)
Bergman’s final screen appearance proved to be one of her most acclaimed. In Ingmar Bergman‘s film, she returned to her Swedish-language roots for this family drama in which she plays Charlotte, a renowned pianist who is invited by her housewife daughter Eva (Liv Ullmann) to return to her village in hopes of a reconciliation, which proves to be easier said than done.

4. ANASTASIA (1956)
In Anatole Litvak‘s historical drama, Bergman won her second Best Actress Academy Award as Anna, an amnesiac who bears a striking resemblance to Russia’s Grand Duchess Anastasia, who was widely rumored to have survived the massacre of her royal family during the Russian Revolution. Anna soon becomes a pawn in an extortion scheme by a renegade Russian general (Yul Brynner) to use Anna’s resemblance to claim Anastasia’s £10 million inheritance.

3. GASLIGHT (1944)
Bergman won her first Best Actress Academy Award as Paula Alquist, who, as a young girl, witnessed the murder of her aunt. Now grown up, she is whisked off her feet by Charles Anton (Charles Boyer), who convinces her to leave her friends behind and live with him in London. Slowly but surely, the manipulative Charles gaslights Paula, persuading her that the events and evidence she is clearly seeing aren’t really happening, thus having her question her own sanity and her own memories of the murder.

2. NOTORIOUS (1946)
Throughout her career, Bergman was showered with critical recognition and awards, but I would argue that her two best films — at least the two that have aged the strongest — received no critical awards for her at all. The first is “Notorious,” to my mind one of Hitchcock’s best films and a very mature work by the master, in which he treated a love story seriously and not just an adjunct to the suspense plot. Bergman plays Alicia Huberman, daughter of a Nazi spy, who is engaged by agent T.R. Devlin (Grant) to infiltrate a Nazi ring in Brazil.

1. CASABLANCA (1942)
“Play it once, Sam, for old times’ sake. Play it, Sam. Play ‘As Time Goes By.'” With those words, Bergman became a part of film history with her indelible performance as Ilsa Lund, the wife of Czech Resistance leader Victor Laszlo (Paul Henreid), who suddenly appears in the Casablanca cafe and gambling den of American expatriate Rick Blaine (Humphrey Bogart), Ilsa’s former lover and a man for whom she still carries a torch. Rick and Ilsa’s romance is one of the great love stories, and Bogart & Bergman bring it to life so skillfully that “Casablanca” remains a beloved American classic to this day.