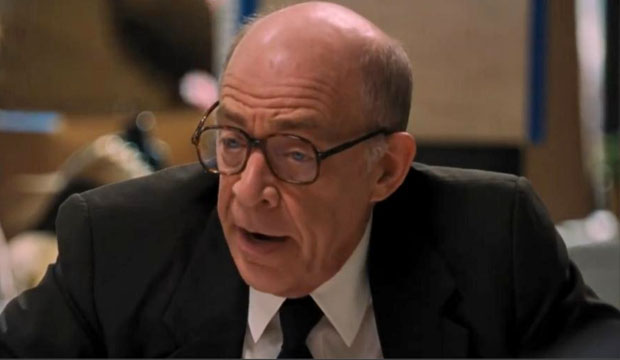 J.K. Simmons has been rather busy since snagging an Oscar, Golden Globe, SAG, BAFTA and more than three dozen other industry trophies for “Whiplash.”

Nonetheless,  Simmons has managed to whip up lots of great roles from all of those job offers while dodging anything similar to that terror-inspiring music teacher who earned him so many kudos.

“Right after ‘Whiplash’ and right after all the awards, there were a lot of offers to play the mean, sadistic bastard who berates everybody,” he says. “I managed to steer clear of those, I think.

“Back from my days of doing theater, I have been lucky enough and smart enough to pretty much avoid being typecast, other than a bald white guy. So the offers and the things I’ve been able to do have been a pretty decent range of things. There’s been enough variety to keep me interested.”

Right now he appears as a campaign chief who’s desperately trying to rescue the scandal-beset presidential bid of Sen. Gary Hart (Hugh Jackman) in Jason Reitman‘s “The Front Runner.” He also plays dual roles (one good, one bad) in “Counterpoint,” which has earned gushing reviews from TV critics and a passionate fan base on Starz.

His next project is as a New York cop in “17 Bridges” with Chadwick Boseman. He’s played a lot of cops. But doesn’t think he’s pigeonholed himself.

Even though he’s the lead star of “Counterpoint,” Simmons still considers himself a “character actor,” a title he is more than comfortable with, albeit in a self-deprecating way.

“I think character actor means you’re not all that good looking,” he says with a laugh. “I think most actors who want to do a variety of parts want to be called character actors. I hope that when people look at me they don’t see an actor, they see a character.”

One character he’s not about to give up, commercial spokesman for Farmer’s Insurance. “I love that guy and he’s obviously paying the mortgage.”