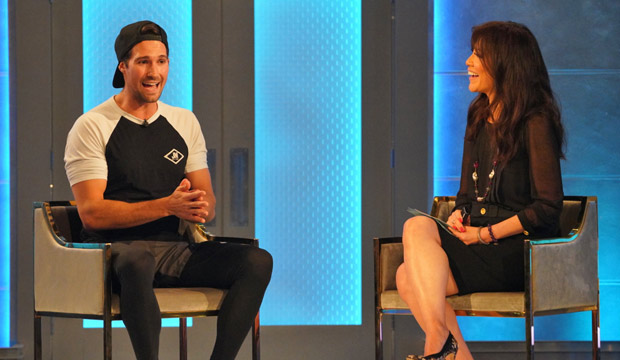 “You look really attractive!” shouted Ross Mathews as a disgruntled James Maslow exited the “Celebrity Big Brother” house; the second casualty of Friday’s double eviction episode. James was sent packing courtesy of Omarosa, who defeated him in a tie-breaker to win the HOH competition just minutes earlier. “I did what no one else would and I don’t mind,” she said. “I took out the biggest target in the house out.”

When James met up with Julie Chen to discuss his eviction, he was still a bit rattled by what happened. “I’m pretty surprised. But with this few of numbers anything can happen. I know that [Omarosa] really wanted to get out Marissa [Jaret Winokur], but the smarter move would have been Ariadna [Gutierrez]. Nobody would vote for Ari (to go home) over Marissa. But she went with me, and it worked.”

But was the house right to evict the athletic heartthrob? “Look, I wasn’t going to make it easy on them. I avoided winning as long as I could. I tried to win today and planned on winning moving forward.” But where did it all go wrong for James? “I think I went wrong by not really committing to a deal with Omarosa. I wanted to stick with my final four, but if I had her trust a little bit more she probably wouldn’t have put me up right now.”

What did James really think of his arch rival in the house, Brandi Glanville? “I think she just had a crush,” Maslow joked, “I want to chalk it up to third grade crushes. I don’t think she’s matured past that. I’m going to take it as a compliment.”

And who does he believe has what it takes to win the game? “Ross has played a solid game all the way through. I don’t think keeping Marissa over me was best for him because he had a better chance next to me than next to her. But she may not continue. So, Ross has a chance, Omarosa has a chance. But Ross has played the best so far.” James then celebrated his “Celebrity Big Brother” experience with one personal victory, “At least I beat Brandi!”

'Big Brother' will return for a 22nd season, and yes, so will Julie Chen Moonves

'Big Brother': How to vote for America's Prankster and really mess with Holly Allen's HOH…

'Big Brother' America's Favorite Houseguest: Who do YOU want to win $25,000 prize in Season 21 finale…