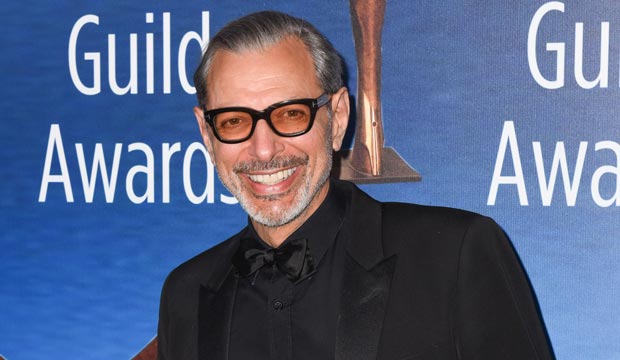 Jeff Goldblum has returned to one of his most successful roles with Dr. Ian Malcolm in the film “Jurassic World: Fallen Kingdom.” Goldblum first played the character in the blockbuster film “Jurassic Park” back in 1993. The actor has had a highly successful career in film, television and theater for over 40 years.

Goldblum’s film career started in a particularly auspicious manner since his first four films were all highly regarded works of the early 1970s: “Death Wish”, “California Split”, “Nashville” and “Next Stop, Greenwich Village.” He continued to work in film and television for the next four decades and even returned to Broadway a few times, most notably in the highly regarded Martin McDonough play “The Pillowman.”

Along the way Goldblum has picked up a number of award nominations including an Oscar nomination for Best Live Action Short Film for “Little Surprises.” He received an Emmy nomination for a guest appearance on “Will and Grace” in 2005. He also was a nominee for Best Actor for two of the most prestigious critics awards groups for his work in “The Fly.” Both the New York Film’s Critics and the National Society of Film Critics named him as one of the top three actors of the year. He lost both awards to Bob Hoskins for “Mona Lisa” and was shockingly omitted from that year’s Oscar race for Best Actor.

Let’s take a tour in our photo gallery of his impressive film career, which includes the movies mentioned above plus “The Big Chill,” “Independence Day” and “The Grand Budapest Hotel.” We’ve got 15 of his greatest performances in the gallery, ranked from worst to best.

SEESteven Spielberg movies: Every film ranked from worst to best

15. THOR: RAGNAROK (2017)
Practically everybody in the Screen Actors Guild was in “Thor: Ragnarok” and Goldblum was no exception. Amidst the likes of Anthony Hopkins and Cate Blanchett, Goldblum managed to make an impact as Sakaar one of Elders of the Universe. Goldblum wasn’t burdened with the blue makeup that his character in the comic books has because the director wanted to let his full personality show.

14. THRESHOLD (1981)
This Canadian film featured one of Goldblum’s earliest performances in a major role. The film was nominated for 10 Genie Awards (a top Canadian award) in all major categories including one for Goldblum as Best Foreign Actor. Goldblum has a field day with his character who is kind of a mad scientist who has invented an artificial heart that he wants Donald Sutherland (Genie for Best Actor) to implant.

13. ANNIE HALL (1977)
Goldblum found a place in film history with one tiny line in this Oscar winner for Best Picture of 1977. When eternal New Yorker Alvy Singer (Woody Allen) spends a disastrous few days in Los Angeles, one of the many tortures he endures is a typical Hollywood party. Goldblum’s one line said into a telephone of “I forgot my mantra” became a meme of the time and a symbol of flaky Californians and their quest for new age spirituality.

12. INTO THE NIGHT (1985)
Goldblum teamed with Michelle Pfeiffer (in her first lead role post “Grease 2”) for this story of a depressed man whose wife has left him who inadvertently becomes involved with a young stranger he meets at the airport. She is involved in a jewel heist and the two have various adventures driving around Los Angeles at night.

11. THE RIGHT STUFF (1983)
Goldblum has a small role in this epic story of the Apollo astronauts and America’s quest to fly to the moon. Paired with Harry Shearer, Goldblum plays a somewhat comic NASA recruiter looking for astronauts to join the space program. This was an important year for Goldblum’s film career since his presence in this film as well as “The Big Chill” helped redirect his career towards feature films when in the past few years he had mostly been seen on television.

9. IGBY GOES DOWN (2002)
Goldblum plays one of the many relatives of the title character Igby (Kieran Culkin) who are causing the young college student to be depressed. The story which envokes a little bit of “The Catcher in the Rye” and Holden Caulfield type angst features Goldblum as a slick womanizing real estate developer.

8. THE TALL GUY (1989)
This largely forgotten gem of a movie features the film debut of Emma Thompson. It also is the first screenplay written by Ricard Curtis who would go on to write such beloved classics as “Four Weddings and a Funeral”, “Love, Actually”, and “Notting Hill.” Goldblum stars as an American actor living in London who gets the starring role in a musical being produced by the Royal Shakespeare Company. The bad news is the musical is an inept retelling of “The Elephant Man” simply titled “Elephant!”

7. THE LIFE AQUATIC WITH STEVE ZISSOU (2004)
This film from Wes Anderson often divided his fans but one thing most agreed on was that Goldblum was one of the film’s highlights. The film follows the adventures of a Jacques Cousteau type oceanographer played by Bill Murray. Goldblum plays a rival to Murray.

6. THE GRAND BUDAPEST HOTEL (2014)
Goldblum reunited with Anderson for a small role in this highly acclaimed film. He plays the attorney representing the estate of the character played by Tilda Swinton, whose death sets up the scheming and maneuvering that goes on in the film. The film received nine Oscar nominations including ones for Best Picture and Best Director.

5. INDEPENDENCE DAY (1996)
“Independence Day” was the highest grossing film of 1996. This story of hostile aliens invading earth featured Goldblum as a technical expert from MIT who assists in plotting a way to defend earth along with Will Smith from these hostile invaders.

4. INVASION OF THE BODY SNATCHERS (1978)
This story of pods from outer space invading earth by duplicating earth’s citizens has inspired many remakes since the original was made in 1956. This was the first and best remake expertly brought to the screen by visionary director Phillip Kaufman. Goldblum plays a friend of the lead character played by Donald Sutherland.

3. JURASSIC PARK (1993)
This 1993 release from director Steven Spielberg based on the acclaimed novel by Michael Crichton became the highest grossing film of that year. Goldblum plays one of the scientists who is invited to preview an amusement park that features live dinosaurs who have been cloned back into existence. Things don’t go as planned and the dinosaurs get out of control.

2. THE BIG CHILL (1983)
The film about a bunch of 1960s college students reuniting after the suicide of one of their friends touched a nerve with many who had marched and crusaded against the Vietnam war but who now found themselves caught up in the materialism of the Reagan era 1980s. Goldblum plays a People Magazine reporter who has gleefully embraced has job covering somewhat silly stories.

1. THE FLY (1986)
Goldblum and Geena Davis were perhaps odd choices for the leads in this film remake since they were primarily known for their comedic work at this time. The offbeat casting worked though and Goldblum received particularly excellent reviews as a scientist trying to invent teleportation. He succeeds in being able to do that except for one pesky fly who gets into the teleporter and melds with Goldblum’s character.

'Thoughts of a Colored Man': Critics find this new Broadway play to be 'poetic' but 'uneven'…