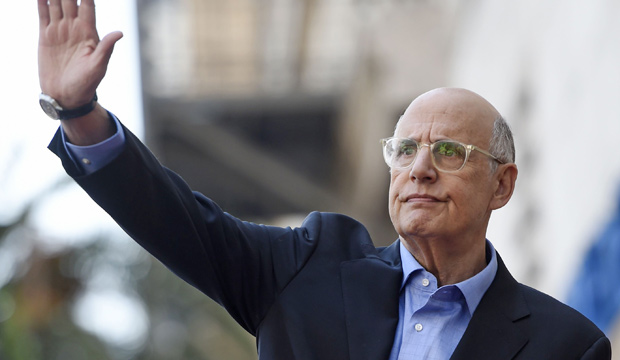 Jeffrey Tambor has exited the Emmy race for Amazon’s “Transparent,” Gold Derby has learned exclusively. The streaming service confirmed to us that the two-time Best Comedy Actor winner, who left the show after Season 4 amid sexual harassment allegations, will not be submitted on the 2018 Emmy ballot by the studio. Tambor’s representatives declined to comment. We also reached out to Netflix and Fox Studios to find out whether Tambor will be submitted as a supporting actor for “Arrested Development,” but did not hear back by press time.

Tambor earned Emmy nominations for the first three seasons of “Transparent” for his role as transgender parent Maura Pfefferman. He won back-to-back trophies in 2015 and 2016, but lost last year to Donald Glover (“Atlanta”). Even though Tambor won’t be on the Emmy ballot for “Transparent,” Amazon is still pushing many of the show’s actors, including Gaby Hoffmann, Amy Landecker, Judith Light, Jay Duplass, Rob Huebel and Alexandra Billings. See the complete list of Amazon’s 2018 Emmy submissions.

After news of Tambor’s alleged inappropriate behavior came to light last year, the 73-year-old actor was subsequently snubbed by the Golden Globes, Critics’ Choice and SAG Awards for the fourth season of “Transparent,” which streamed September 21 on Amazon. Since he’d previously taken home awards from each of those organizations (Globes in 2015, Critics in 2015-16, SAG in 2016), it’s possible that the scandal had a direct result in his being snubbed.

This isn’t the first time that an Emmy Award winner has dropped out of the race when they were still eligible to return. In fact, actors like Candice Bergen (“Murphy Brown”) and John Larroquette (“Night Court”) prevailed so often that they eventually removed their own names from contention in order to let others win.

Then there’s Katherine Heigl, who declined to submit her name on the ballot for “Grey’s Anatomy” in 2008 after winning the previous year. As Heigl revealed to Gold Derby, “I did not feel that I was given the material this season to warrant an Emmy nomination and in an effort to maintain the integrity of the academy organization, I withdrew my name from contention.”

The upcoming fifth season of “Transparent,” the first without Tambor, will also be the show’s last. Creator Jill Soloway recently told The Hollywood Reporter, “Hopefully it sets the Pfeffermans up with some sort of beautiful reclaiming. I think we’re going to get there with some time.”