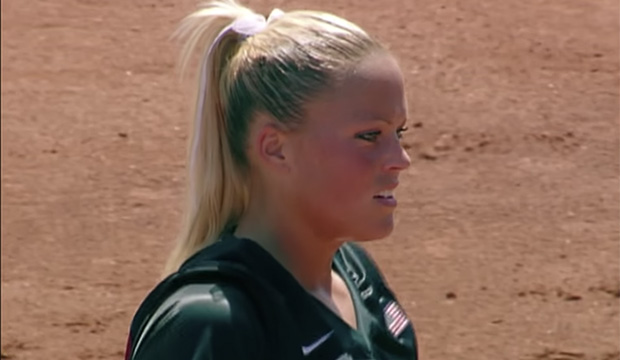 The former pitcher is the fourth Olympian — and first summer Olympian — reported to be in the 10-person cast, following figure skaters Tonya Harding and Adam Rippon, and snowboarder Jamie Anderson. Honestly, if the whole cast is made up of Olympians, that’s OK with us. They should probably change the name to “Dancing with the Stars: Olympians” though.

An All-American at Arizona, Finch led the U.S. women’s softball team to a gold medal in Athens in 2004, striking out 13 batters in eight innings while giving up only one hit, one walk and no runs. The team won silver in 2008, after which the sport was dropped from the Olympics. Finch, who also pitched for the Chicago Bandits and retired in 2010, lobbied for its re-inclusion and softball will return at the 2020 Olympics in Tokyo.

Finch will be the first softball player in “Dancing” history. Two-time World Series champ David Ross was the first baseball player to compete on “Dancing,” finishing second on Season 24.

The full “Dancing with the Stars: Athletes” cast will be revealed on Friday, April 13 on “Good Morning America.” The show premieres Monday, April 30 at 8/7c on ABC.