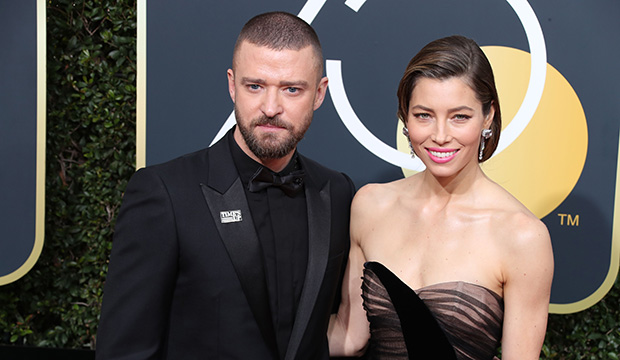 Jessica Biel received her first career Emmy nomination last week, for Best Limited Series/TV Movie Actress for “The Sinner,” and her husband Justin Timberlake was just as pumped as she was. He tweeted his excitement and commented on her Instagram post. Proud hubby all around. And if Biel takes home the gold, she and Timberlake will join a long line of married couples who’ve won acting Emmys.

A four-time winner, Timberlake has “Saturday Night Live” to thank for all his statuettes. He won two for songwriting (“Dick in a Box” in 2007 and his 2011 monologue) and two for Best Comedy Guest Actor, in 2009 and 2011. He has an addition guest nomination for “SNL” and three other songwriting nominations, two for “SNL” and one for the 2008 ESPYs. Too bad he didn’t host “SNL” last season because then he and Biel could’ve been nominees in the same year (you know he would’ve been nominated).

Performers who’ve won acting Emmys before or during their marriage include:

Daniels and Bartlett, and Lunt and Fontanne are the only married couples to win acting Emmys on the same night for the same program. Lunt’s and Fontanne’s wins, however, were shared; that year, the academy handed out multiple awards in just four categories (program, performing, directing and writing), and Lunt and Fontanne were two of the five performers (out of 16 nominees) to win. Though they’re not married, “The Americans”‘ Keri Russell and Matthew Rhys have their third and final chance this year to become the third couple to take home Emmys on the same night for the same show.

Biel is currently in second place in our early odds. She’s up against some Emmy faves: Laura Dern (“The Tale”), who’s predicted to win, Michelle Dockery (“Godless”), Regina King (“Seven Seconds”), Sarah Paulson (“American Horror Story: Cult”) and Edie Falco (“Law & Order True Crime: The Menendez Murders”). Of those, only Dockery has not won an Emmy, but she has three previous nominations for “Downton Abbey.” Biel might score some extra points for producing “The Sinner,” which didn’t make the limited series cut. Season 2 will be airing during winner voting, but Biel is only back as a producer.

Do you think the TimberBiels will have to make room in their trophy case?