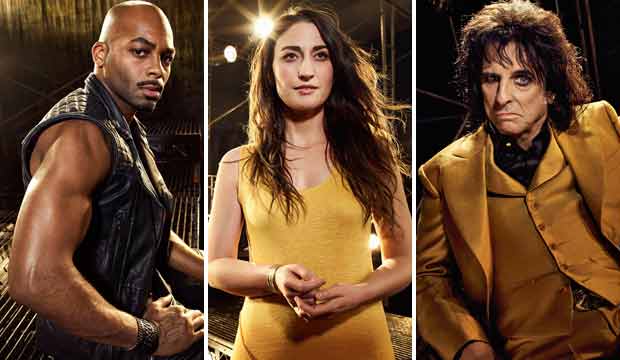 NBC’s live production of “Jesus Christ Superstar” broadcast on Easter Sunday, April 1, to excellent reviews (with a current MetaCritic score of 81). In recent years these live theatrical shows have become more popular on broadcast TV, and a few of them have gone on to win Emmys, like FOX’s “Grease Live” and NBC’s own “Hairspray.” But they haven’t broken through in movie/limited series acting categories yet. That could change this year with standout performers Sara Bareilles, Brandon Victor Dixon and Alice Cooper entering wide-open supporting races.

It’s true that John Legend could be nominated for and win Best Movie/Mini Actor for his leading role as Jesus, and he would gain EGOT status in the process, but that race is stacked with admired A-list actors like Al Pacino (“Paterno”), Kyle MacLachlan (“Twin Peaks”), Benedict Cumberbatch (“Patrick Melrose” and “The Child in Time“), Antonio Banderas (“Genius: Picasso”) and Jeff Daniels (“The Looming Tower”), to name just a few. It may be challenging for a less established actor like Legend to break through there, though there is precedent: fellow musician Mos Def made the cut in the same category back in 2004 for the telefilm “Something the Lord Made.”

But the opportunities for “Superstar” may be even greater in the supporting categories, where there is little consensus in our predictions and thus potentially more room to maneuver. In the Movie/Mini Supporting Actress race, for instance, the Expert journalists we’ve polled are split 5 ways in picking the winner and 12 ways in predicting the nominees. That could open the door for Bareilles, who has standout numbers like “Everything’s Alright” and “I Don’t Know How to Love Him” as Mary Magdalene. Bareilles is best known as a recording artist, like Legend, but she established her theater chops by composing the score for “Waitress” (which earned her a Tony nomination) and later taking over the lead role after the original star, Jessie Mueller, ended her run.

Movie/Mini Supporting Actor is similarly up in the air. Experts say there are three men who could win that contest and 14 who could be nominated. Legendary rocker Cooper could take one of those slots for his memorable role as King Herod, but this would be his first acting recognition of any kind, and Herod only has one number in the show. So the better bet for the production may be Dixon for playing Judas Iscariot, who has a powerful story arc (from his betrayal of Jesus to his suicide) and multiple memorable numbers, including the closing showstopper “Superstar.” Dixon is a theater vet with a Tony for Best Musical Revival for producing “Hedwig and the Angry Inch” and two acting nominations for his featured roles in the musicals “The Color Purple” (2006) and “Shuffle Along” (2016). What’s more, when “Superstar” has been performed on Broadway the only actors ever nominated for Tonys both played Judas: Ben Vereen in 1972 and Josh Young in 2012.

But Emmy voters haven’t been too keen on nominating actors from live musicals since they have become more prevalent in recent years. Even when “Grease Live” won five Emmys out of nine nominations in 2016, none of those bids were for the performances. There have been a couple of exceptions: Emma Thompson earned a Best Movie/Mini Actress nom in 2015 for starring in a filmed stage production of “Sweeney Todd (Live from Lincoln Center),” and Audra McDonald was nominated in the same category in 2016 for a filmed version of “Lady Day at Emerson’s Bar and Grill.” But both of those were filmed and broadcast later, not designed to go out to a live audience in real time. Nevertheless, it might mean that Emmy voters will be open to live musical performers under the right circumstances, so it could be “Jesus” that breaks the curse.