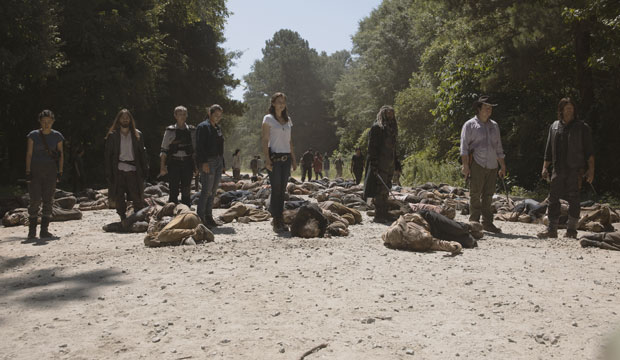 Warning: the following story contains major spoilers from “The Walking Dead” mid-Season 9 finale. Read at your own risk!

“He went out the way he came in,” Tom Payne told Chris Hardwick Sunday night on “Talking Dead” after his fan-favorite character Jesus was shockingly killed off of “The Walking Dead” during the winter finale, “Evolution.” “He introduced the Saviors which was the last big group, and now he’s introducing this new big group. I think that’s really cool and I’m honored to have done that in the show.” Will you miss Jesus on “The Walking Dead”? Let us know by voting in our poll below.

So how did Jesus bite the dust? After several characters, including Eugene (Josh McDermitt), started wondering whether the walkers were evolving and whispering, Jesus’ group came face-to-face with the new threat at a foggy cemetery. That’s when they made the discovery that humans were actually hiding within the skin and clothing of walkers in order to blend in. Jesus was in the midst of killing normal walkers when one of the human imposters got the better of him and stabbed him with a knife, killing him.

New showrunner Angela Kang broke the news to Payne that he’d be leaving the zombie apocalypse drama after three years as Jesus. As Payne confirmed, “I got the call an episode before. I was texting with my girlfriend — now fiance — and saying, ‘Angela just called me and I missed the call.’ I was like, ‘Oh, maybe it’s the call.’ I called [Angela] back and then I texted my fiance and I was like, ‘It was the call.’ It was kind of funny because I think that was the first time that Angela had made that phone call. I think I was an easy one the first time. I was like, ‘All right, okay, cool.’ If it’s cool and it fits the story and it works, then I’m down with it.”

Even though Payne was fine with leaving “The Walking Dead,” he wanted fans to know that he was “really happy” with the way Jesus went out, for two reasons: “First of all, because Jesus finally got to kick some ass and he wasn’t fighting someone who’s on his side like he did before. Secondly, because just the way we shot it and the smoke and everything leading up to it with Ross Marquand and Josh, and having the sword, and just managing to kick some ass.”

As for his epic fight scene in the foggy cemetery, Payne remembered, “At that point Jesus is kind of having fun with it. Like, he’s out of the walls of the Hilltop which he’s been stuck in. I just want to get out there and do some stuff. He’s showing off.” Find out how the other characters react to Jesus’s shocking death when “The Walking Dead” Season 9 returns in February.