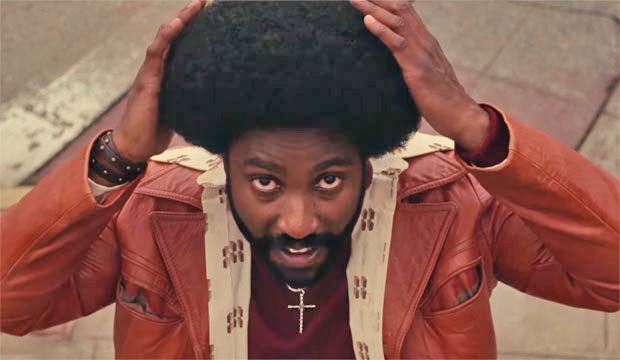 The Golden Globes love to acknowledge the children of major Hollywood stars, and no one fits the bill more at this upcoming ceremony than John David Washington. The son of Denzel Washington and Pauletta Washington, John David has earned strong acclaim for his performance as Ron Stallworth in “BlacKkKlansman,” and awards experts are saying he is a contender to receive his first Golden Globe nomination in the Best Drama Actor category, especially because of the Hollywood Foreign Press Association’s proclivity for showbiz dynasties.

SEELike father, like son: Spike Lee could direct John David Washington to an Oscar nom 26 years after his dad

The Golden Globes have made it a tradition of letting the son or daughter of a Hollywood star hand out the trophies onstage at the ceremony in a role formerly known as Mr. or Miss Golden Globe and is now called Golden Globes Ambassador. We’ve also seen children with show business parents get nominations and even wins of their own, including: Laura Dern (daughter of Bruce Dern and Diane Ladd), Jamie Lee Curtis (daughter of Janet Leigh and Tony Curtis), Melanie Griffith (daughter of Tippi Hedren and Peter Griffith), and Tracee Ellis Ross (daughter of Diana Ross and Robert Ellis Silberstein). While sons of Hollywood stars haven’t had as much success, you can imagine Golden Globes voters would be drawn to the idea of rewarding the son of someone as legendary as Denzel.

It helps that John David Washington plays such a compelling figure in “BlacKkKlansman,” with his Ron Stallworth intercepting the local Ku Klux Klan and having many ironic phone conversations with Grand Wizard David Duke (Topher Grace). At the moment, Golden Globes predictors have Denzel’s son eighth in line for a Best Actor nomination, but with “BlacKkKlansman” expected to come on so strong this award season, especially with director Spike Lee being overdue, experts could be underestimating the film’s star at their own peril. After all, the film is predicted to do extremely well at the Globes, with prognosticators expecting nominations in Best Picture (Drama), Best Director and Best Screenplay, with Adam Driver close to breaking into Supporting Actor.

SEEAdam Driver: ‘BlacKkKlansman’ shows how racism ‘has been part of the conversation in this country for so long’ [EXCLUSIVE VIDEO INTERVIEW]

One must also consider the competition in Best Actor. Were John David Washington to miss, only two predicted nominees would be in Best Picture-nominated films — Bradley Cooper for “A Star Is Born” and Ryan Gosling for “First Man.” The other contenders include Willem Dafoe (“At Eternity’s Gate”), Rami Malek (“Bohemian Rhapsody”), Lucas Hedges (“Boy Erased”), Hugh Jackman (“The Front Runner”) and Steve Carell (“Beautiful Boy”), whose respective films are not expected to net Best Picture noms.

Last year we saw all but one of the 10 Best Picture nominees at the Globes earn a corresponding lead acting nomination, with the one exception, “Dunkirk,” not having a proper lead. So if “BlacKkKlansman” is as strong as people are predicting, it would be wise to consider putting John David Washington in your top five of nominations, especially given his Hollywood heritage. With Denzel having won two competitive Golden Globes in his career plus the Cecil B. DeMille Award just two years ago, do we really think they’ll pass up the chance to pass the torch to his on-the-rise son?