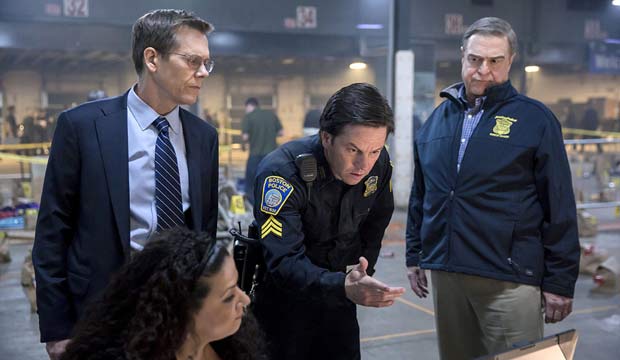 John Goodman shockingly never won an Emmy for his role as working-class father Dan Conner in “Roseanne” despite competing seven consecutive times as Best Comedy Actor for the ABC sitcom (1989-1995). He did eventually win as Best Drama Guest Actor in 2007 for “Studio 60 on the Sunset Strip,” but now he could finally cash in that “Roseanne” Emmy I.O.U. with the upcoming series revival, premiering on Tuesday, March 27. But Goodman hasn’t only made a name for himself on TV. In honor of his return to the small screen, let’s take a look back at some of his best big-screen performances. Tour through our photo gallery above of Goodman’s 20 greatest films, ranked from worst to best.

Surprisingly (and criminally), not one of these roles brought Goodman an Oscar nomination. He did compete at the Golden Globes as Best Supporting Actor for “Barton Fink” (1991), but the academy went for his co-star Michael Lerner instead. Goodman also contended at the Globes four times as Best TV Comedy Actor for “Roseanne” (1989-1991, 1993), winning in 1993.

At the Emmys, in addition to his “Roseanne” and “Studio 60” bids, Goodman also contended for his TV-movie work: once as Best Movie/Mini Actor (“Kingfish: A Story of Huey P. Long” in 1995) and twice as Best Movie/Mini Supporting Actor (“A Streetcar Named Desire” in 1996 and “You Don’t Know Jack” in 2010). That’s 11 nominations overall, so he’s obviously popular with the TV academy. Can he make an Emmys return this year?

Take a look through our gallery of Goodman’s greatest films. Aside from “Barton Fink,” what else was he egregiously snubbed by the motion picture academy for?

20. ‘Patriots Day’ (2016)
Goodman is just one of several A-list actors headlining this true crime drama from Peter Berg, which recounts the aftermath of the 2013 Boston Marathon Bombing. He plays Commissioner Ed Davis, who worked with the police and the FBI in a city-wide manhunt to find the terrorists responsible.

19. ‘The Flintstones’ (1994)
It’s one of the great alchemies of casting that John Goodman played Fred Flintstone in this big screen adaptation of the beloved cartoon. The actor is uncanny in his ability to not just look and sound like the 2D creation, but capture his spirit as well. The same goes for Elizabeth Perkins as wife Wilma and Rick Moranis and Rosie O’Donnell as best friends Barney and Betty Rubble.

18. ‘Always’ (1989)
Growing up, Steven Spielberg loved “A Guy Named Joe,” the 1944 romantic drama about a deceased WWII bomber (Spencer Tracy) forced to become the guardian angel to a younger pilot (Van Johnson) who’s falling in love with his former girlfriend (Irene Dunne). As an adult, he remade it with Richard Dreyfuss as a forrest fire fighter, Brad Johnson as a young airman, and Holly Hunter as the dead man’s girl. Goodman plays Al Yackey, a fellow pilot who Dreyfuss dies trying to save.

16. ‘The Big Easy’ (1987)
Few movies capture the city of New Orleans quite like “The Big Easy,” Jim McBride’s sensual thriller about a vice cop (Dennis Quaid) who begins an elicit affair with a special prosecutor (Ellen Barkin) while investigating a string of murders. Goodman makes a memorable appearance as De Soto, a detective working for the corrupt commanding officer (Ned Beatty, who played Goodman’s father on “Roseanne”) behind the killings.

SEE ‘Roseanne’: Best 25 episodes of all time include ‘Life and Stuff,’ ‘Crime and Punishment,’ ‘A Stash from the Past’ and…

15. ‘The Artist’ (2011)
Michel Hazanavicius’ “The Artist” is a love letter to Hollywood in every way, which is probably why the Academy went so gaga for it. Jean Dujardin stars as George Valentin, a silent movie star who falls in love with a young dancer (Berenice Bejo) as the arrival of sound threatens to end his career. Goodman is perfectly cast as Al Zimmer, the cigar-chomping studio boss who heralds the arrival of talkies.

14. ‘Storytelling’ (2001)
Todd Solondz’s “Storytelling” gives you two movies for the price of one, and neither will appeal to everyone. The first, “Fiction,” follows a college student (Selma Blair) who has a one night stand with her creative writing professor (Robert Wisdom), then tries to use it as material. The second, “Non-Fiction,” focuses on a dysfunctional New Jersey family who are the subjects of a documentary. Goodman plays Marty Livingston, the imposing, bombastic patriarch who fights with his pot smoking son (Mark Webber).

13. ‘Bringing Out the Dead’ (1999)
Martin Scorsese returns to the mean streets of New York City with “Bringing Out the Dead,” a surreal and nightmarish journey into the abyss. Nicolas Cage stars as Frank Pierce, a Manhattan ambulance paramedic who is haunted by the patients he fails to save. Goodman plays Larry, a fellow EMT who accompanies Frank as he struggles to maintain his sanity over the course of three nights.

12. ‘Arachnophobia’ (1990)
If you’re looking for a movie to give you the creepy-crawlies, look no further than Frank Marshall’s horror-comedy about those most deadly of insects. Jeff Daniels stars as a doctor with a crippling fear of spiders who must wage war against a killer species of South American arachnids who find their way into small town America. Goodman steals the show with a memorable supporting turn as Delbert McClintock, the local exterminator who realizes he needs a bigger can of bug spray to fight these vicious little monsters.

11. ‘Argo’ (2012)
Ben Affleck’s Best Picture winner is based on one of those truth-is-stranger-than-fiction stories that feels perfectly conceived for the movies. Affleck stars as Tony Mendez, a CIA extractor who enlists a Hollywood producer (Alan Arkin) and makeup artist (Goodman) to cook up a phony science-fiction epic as a cover for rescuing six American hostages in Tehran.

10. ‘Sea of Love’ (1989)
There aren’t many actors who can go toe-to-toe with Al Pacino, but Goodman proves himself a capable scene partner in Harold Becker’s psycho-sexual thriller. Pacino plays Frank Keller, a detective who teams up with Det. Sherman Touhey (Goodman) to track down a serial killer who finds victims through newspaper singles columns.

9. ‘Flight’ (2012)
Without Goodman to bring it some much-needed comedic relief, Robert Zemeckis’ “Flight” would be a pretty depressing dirge about drug addiction and alcoholism. Denzel Washington earned an Oscar nomination as Best Actor for playing Whip Whitaker, an ace pilot who saves the lives of almost all his passengers after an eleventh-hour crash landing.

8. ‘Inside Llewyn Davis’ (2013)
Goodman makes a small but memorable appearance in this moody Coen Brothers comedy. Set in 1961, the film follows a misbegotten folk singer named Llewyn Davis (Oscar Isaac) who struggles to keep afloat in Greenwich Village. Desperate for cash, he travels to Chicago with a beat poet named Johnny Five (Garrett Hedlund) and a jazz musician named Roland Turner (Goodman), who doesn’t care much for folk singers.

7. ‘Raising Arizona’ (1987)
Goodman’s first collaboration with the Coen Brothers is this wacky comedy about a former police officer named Ed (Holly Hunter) who marries an ex-convict named Hi (Nicolas Cage). Devastated to learn they can’t have children, they decide to steal one from a wealthy local businessman (Trey Wilson) whose wife gives birth to quintuplets. Goodman plays Gale Snoats, who escapes from prison with his brother (William Forsythe) and shows up at Hi’s doorstep.

6. ‘O Brother, Where Art Thou?’ (2000)
Taking its inspiration from Homer and Preston Sturges, this is one of the silliest creations yet by the Coen Brothers. Loosely based on “The Odyssey” (which the Coens apparently have never read), the film centers on three escaped convicts – Ulysses Everett McGill (George Clooney), Pete Hogwallop (John Turturro), and Demlar O’Donnell (Tim Blake Nelson) – on a quest for hidden treasure in the Depression-era South. They encounter several colorful characters – most notably Goodman as a violent Bible salesman – and manage to play a little bluegrass along the way.

4. ’10 Cloverfield Lane’ (2016)
In most of his films, Goodman is warm and cuddly, like a giant teddy bear come to life. In “10 Cloverfield Lane,” he uses that innate kindness and charm to bring us the most skin-crawlingly creepy bad guy since Norman Bates. He plays Howard, a survivalist who traps a young woman (Mary Elizabeth Winstead) in his basement, claiming that aliens have invaded and his stock-piled abode is the only safe place for miles.

3. ‘Monsters, Inc.’ (2001)
Goodman entered the Pixar dream factory with Pete Docter’s imaginative story about the world’s friendliest monsters. He voices James P. “Sully” Sullivan, who along with his partner Mike Wazowski (Billy Crystal) are the top employees at Monsters, Inc., a company that employs top of the line “scarers” to harvest the screams of children, which power the city of Monstropolis.

2. ‘Barton Fink’ (1991)
One of the strangest films ever by the Coen Brothers (and that’s really saying something), “Barton Fink” is part Hollywood satire, part mystery comedy, and all apocalyptic nightmare. When acclaimed playwright Barton Fink (John Turturro) is drafted from Broadway to write a boxing movie, he finds California to be more hellish than he ever imagined. While living in a aged motel he meets Charlie Meadows (Goodman), a working-class salesman who becomes Barton’s only friend. But Charlie isn’t all he appears to be, and Goodman uses his good guy charm to make the character’s final reveal all the more shocking.

1. ‘The Big Lebowski’ (1998)
All due respect to Dan Conner, but the single greatest character Goodman ever created was Walter Sobchak in “The Big Lebowski.” Based in part on screenwriter John Milius, Walter is a lunatic Vietnam vet and bowling fanatic who’s loyal to his best friend, slacker stoner Jeffrey “The Dude” Lebowski (Jeff Bridges). Many of the film’s biggest laugh-out-loud moments come from Goodman’s manic performance as the world’s most unstable sidekick. That he didn’t walk away with a Best Supporting Actor Oscar — let alone a nomination — is an offense The Dude simply cannot abide.